It's the stuff nightmares are made of.

The 30-second clip making its rounds on social media begins innocently enough, with a crab being cooked on a barbeque.

When the 'chef' brings the small crustacean up close to the camera, however, the horrifying reality is revealed.

What appears to be tiny worms are seen wriggling out from under the crab's shell, presumably purged from the heat.

While it is not known what type of worms these are, flatworms (also known as flukes or lung flukes) which commonly inhabit crabs can cause serious infection in humans, reported China Press.

These worms grow in the body, penetrating through the intestines, belly and even the lungs, causing an illness called paragonimiasis, with symptoms resembling pneumonia or stomach flu. Cooking crabs well will kill off the worms, making it safe for consumption.

It is not clear where the video is taken, but the video, uploaded on Monday (Sept 17), has been shared more than 18,000 times on Facebook. 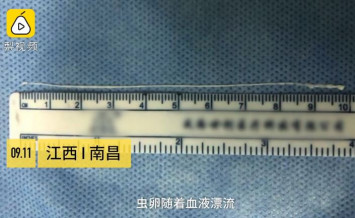 And netizens are understandably horrified.

"I feel like vomiting, it's too scary," wrote one commenter, while another joked: "Eating more protein is good for the body!".

Others took issue with how the crab appears to be barbequed while still alive, as its limbs are still moving when it's lifted off the grill.