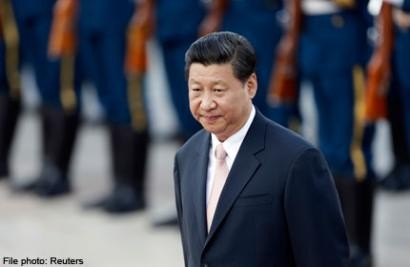 The Chinese economy remains on track despite a recent slowdown, and the country is taking measures to guard against both internal and external risks, President Xi Jinping told top company executives attending the APEC summit in Indonesia on Monday.

Addressing industrial and commercial leaders at the Asia-Pacific Economic Cooperation summit, Xi said China's economic growth remained stable in the first half of this year, and stressed the world's second-largest economy attaches more importance to quality and efficiency in growth than GDP figures.

"I'm fully confident in China's economic prospects. Everything is within expectations and a slowdown was a result of proactive adjustment," he said.

The World Bank said on Monday China's growth will be able to meet its official target of 7.5 per cent this year, while growth in 2014 is projected to pick up further to 7.7 per cent, citing an improving short-term outlook as industrial production data suggests further strengthening of output in the third quarter of 2013.

In the meantime, Xi said, the government remains vigilant on issues such as overcapacity and local debt issues, as well as possible impacts from external environments, and is taking active measures to prevent possible risks.

China's reform has entered a vital and difficult stage, Xi said, adding that the country will stick to its current reform. He also said China will continue its opening process and urged closer partnership across the Asia-Pacific region. "No one should set barriers for this," he said.

"The prospects of the APEC region are increasingly linked to China's outlook," said a recent research report by Moody's Investors Service.

"Slowdown in China's economic growth has had an immediate adverse impact on growth and government finances among natural resource exporters, especially Australia and Indonesia.

"Manufacturers' exports from Japan, Republic of Korea and most ASEAN economies have also suffered from a drop in demand from China, which has become the largest export market for those economies," the Moody's report said.

Chinese leaders have vowed $10 trillion (S$12.5 trillion) of imports for the country over the next five years, together with $500 billion of outbound investment and more than 400 million Chinese tourists going overseas, from which analysts said Asia Pacific economies will be the major beneficiaries.

With raw material imports such as iron ore and crude oil continuing to grow, Lian estimated the country would expand its imports of advanced technologies, key components and consumer goods, so as to further rebalance its trade surplus and relieve appreciation pressure on the yuan.

China has shown some progress in rebalancing its economy, with consumption contributing more to quarterly growth than investment in the two years up to the first quarter of 2013 and services accounting for a larger share of GDP. "Still, the economy has yet to make the decisive turn toward consumer-based growth," the World Bank said.

Developing countries in East Asia have been expanding at a slower pace as China shifts from an export-oriented economy and focuses on domestic demand.

According to the Washington-based lender, the growth forecast for developing countries in the East Asia region is 7.1 per cent for 2013 and 7.2 per cent for 2014, which were slight downward revisions from projections of 7.8 per cent and 7.6 per cent made in April 2013.

However, "The East Asia-Pacific region continues to be the engine driving the global economy, contributing 40 per cent of the world's GDP growth - more than any other region," Van Trotsenburg said.