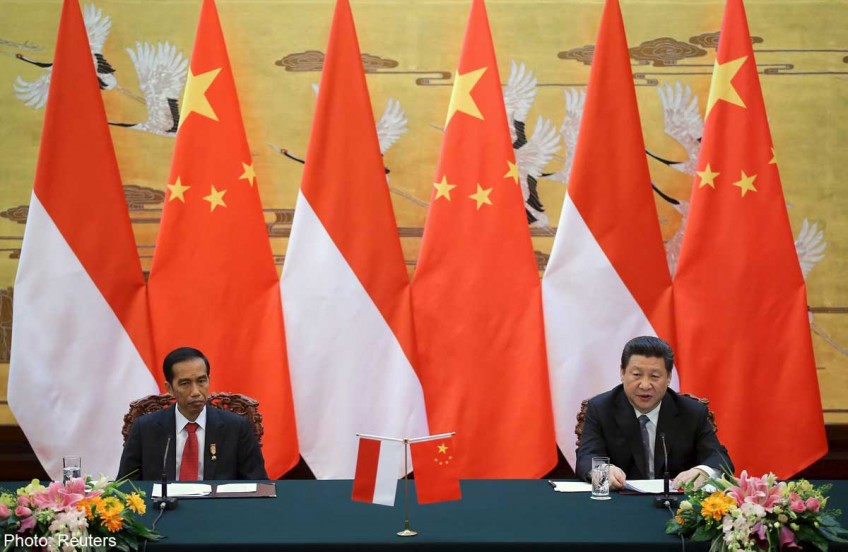 President Joko "Jokowi" Widodo met with Chinese President Xi Jinping at the Great Hall of the People in Beijing on Thursday. After a state welcoming ceremony, the two leaders discussed various bilateral issues and witnessed the signing of several memorandums of understanding (MoU) on the issues of finance, industry, infrastructure, natural disaster management and aerospace.

However, the two leaders apparently did not discuss any specific economic issues leading to more concrete commitments in the short term like those President Jokowi got from his bilateral discussions with Japanese Prime Minister Shinzo Abe in Tokyo on Monday.

"In November last year, when we attended the APEC [Asia-Pacific Economic Cooperation] summit in Beijing, we agreed to translate our diplomatic ties into concrete co-operation beneficial for the two countries. In the last four months our co-operation has achieved progress in all fields," the Antara news agency quoted the Chinese leader as telling his guest.

Jokowi attended the APEC summit in Beijing just one month after he was sworn-in as the country's seventh president in October last year. Indonesia unilaterally froze its diplomatic relations with China after a foiled attempted coup by the Indonesian Communist Party in 1965. Indonesia accused China of being behind the coup attempt. The two countries resumed their relations in 1990 and the relations have been growing rapidly ever since.

Indonesia, the largest economy among the 10 members of ASEAN, suffered a trade deficit with the world's second-largest economy in the last two consecutive years. Its exports to China in 2013 were worth US$22.60 billion (S$30.9 billion) and imports US$29.84 billion. In 2014, the total trade between the two countries reached US$48.23 billion, with Indonesia's exports valued at US$17.60 billion and imports at US$30.62 billion.

"Indonesia is committed to enhancing co-operation with China at bilateral, regional and international levels," Jokowi told the Chinese president.

The President intended to officially invite the Chinese leader to attend the Asia-Africa Summit's 60th conference in Bandung late next month.

The Indonesian news agency did not mention whether the two leaders touched on regional issues, including the overlapping sovereignty claims over the South China Sea. China claims nearly the whole territory, while other claimants are Brunei, Malaysia, the Philippines, Vietnam and Taiwan.

In an interview with a Japanese newspaper, published on Sunday, Jokowi said China's claim does not have legal foundation in international law. He later clarified his statement, arguing that Indonesia just wanted to help accelerate the completion and implementation of a code of conduct on the South China Sea dispute.

He said on Tuesday in Tokyo that he was ready to discuss the issue with Chinese leaders and pointed out that Indonesia had offered to mediate the conflicts. "When it is needed, we are ready to become a good mediator," Jokowi said.

On Friday, Jokowi will meet with the National People's Congress Standing Committee chairman Zhang Dejiang and Premier Li Keqiang. He will also address a meeting between businesspeople from both China and Indonesia. The premier will also attend the gathering.

After his three-day state visit, he will fly to Hainan Province to attend the Boao Forum for Asia 2015 on Saturday, during which he will be one of the keynote speakers.