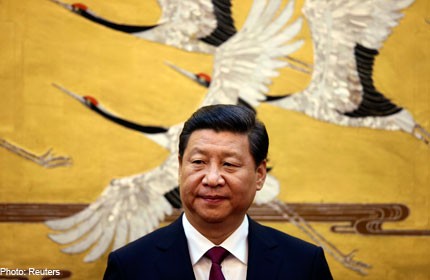 Chinese President Xi Jinping appears to have relaxed the hard-line policies of his two predecessors towards Tibet and the Falungong movement. There have been some encouraging signs.

On June 27, the Free Tibet group reported that Chinese officials have lifted a 1996 ban on the display of the Dalai Lama's photos at Ganden Monastery near Tibet's capital Lhasa. China has long accused the exiled Tibetan spiritual leader of fomenting separatism in the western region.

Last month, a report in the Falungong newspaper Epoch Times noted that the number of Falungong practitioners imprisoned or sent to labour camps in the past few months has fallen sharply while many already incarcerated have been released. The newspaper, citing data from minghui.org which tracks and reports on the persecution of Falungong members, said the total number of new arrests this year up to early September was 1,727, compared with an average of 6,000 annually in the past five years. Also, at least five detention centres have released a huge number of Falungong members this year.

The softening of an erstwhile hard line cannot be coincidental and most likely signals Mr Xi's desire to end the highly repressive religious policies of his predecessor Hu Jintao and before Mr Hu, Mr Jiang Zemin.

Mr Xi's late father Xi Zhongxun, a former vice-premier, is remembered as being sympathetic towards Tibet and had also known the Dalai Lama.

The lifting of the photo ban in Tibet, though fiercely denied by the local authorities, came just days after Ms Jin Wei, director of Ethnic and Religious Studies at the Communist Party's Central Party School, proposed an entirely new approach to resolving the Tibetan issue.

In her interview with the Hong Kong-based Asiaweek on June 9, Ms Jin put the blame squarely on "past Tibetan party leaders" whose tough policies have led to 119 cases of self-immolation by Tibetan monks since 2011. "The policies of several previous Tibet party leaders had gone wrong, sowing the seeds of present-day ethnic grievances," she said.

One of the leaders Ms Jin was alluding to is Mr Hu, who adopted tough policies during his tenure as Tibet party secretary. In early 1989, he ordered a bloody crackdown on rioters in Lhasa. His handling of the unrest earned him praise from then patriarch Deng Xiaoping who later anointed him as Mr Jiang's successor.

Given Ms Jin's position, she would not have voiced her criticism publicly unless she had received tacit approval to do so.

She proposed that existing policies be reversed to resolve the longstanding issue of Tibet.

She said that "as the ruling party, the CCP ought to appreciate the fact that the Tibetans are highly religious people who value spiritual matters more than material ones, and place the next generation above the current ones".

"Failure to appreciate this would doom all policies towards Tibet to failure," she added. She was alluding to Beijing's policy of promoting economic development in Tibet while restricting Tibetans' religious freedom, a policy that has not worked.

The succession issue is also the subject of much controversy given that the Dalai Lama is already 78 years old.

On this matter, Ms Jin noted that when the Dalai Lama eventually dies, it could mark the start of a nightmare for Beijing. The CCP may wish to believe that the Tibetan issue would fade with the Dalai Lama's passing, she said. However, young Tibetans, no longer restrained by his personal authority and insistence on non-violence, could resort to more aggressive behaviour.

Rather than let this scenario turn into reality, Ms Jin suggested that Beijing should try to work out with the Dalai Lama a mutually agreed way to determine the next Tibetan spiritual leader.

She also urged Beijing to resume stalled talks with the Dalai Lama on Tibet's future.

She proposed that the Dalai Lama, who has lived in exile in the Indian town of Dharamsala for more than 50 years, be invited to live on Chinese soil, such as Hong Kong or Macau, instead. Eventually, he could be allowed to return to Tibet.

This more rational and realistic approach towards Tibet will have a better chance of success with Mr Hu out of the political scene.

Similarly, the more tolerant approach towards the Falungong is possible only after Mr Jiang's political clout has diminished.

The main executor of the anti-Falungong policy was Mr Zhou Yongkang, Mr Jiang's protege and former security czar. Mr Zhou's retirement last November made it possible to reverse the highly repressive policy. If the softening of China's stance is sustained, Mr Xi would be making a significant contribution to his country.