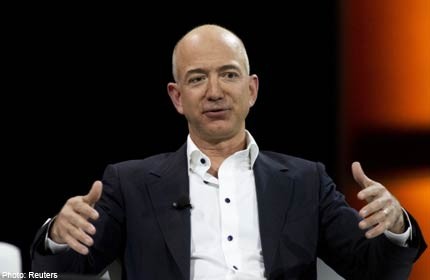 The original parody quoted Jeff Bezos (above) as saying: “I don’t even read the Washington Post.”

The publication on Xinhua's website came days after it posted a photo gallery of images supposedly showing a woman being executed by lethal injection - which instead appeared to have come from a fetish site.

Mr Bezos' acquisition of the Washington institution for US$250 million (S$315 million) was announced earlier this week.

The original parody, entitled "Amazon Founder Says He Clicked on Washington Post By Mistake", was written by comedian Andy Borowitz for his satirical Borowitz Report column, published by The New Yorker magazine on its website.

It joked that the deal had been a "gigantic mix-up", and supposedly quoted the e-commerce magnate as saying: "No way in hell would I buy the Washington Post... I don't even read the Washington Post." He only became aware of his purchase when he noticed an "unusual charge" for US$250 million on his credit card statement, it claimed.

Xinhua quickly took down the "execution" gallery when the mistake was revealed, but the Amazon story was still visible on its site on Friday.

In November, the website of the People's Daily, the mouthpiece of the ruling Communist party, published a story from satirical US magazine The Onion claiming that North Korean leader Kim Jong Un had been voted the "Sexiest Man Alive".