Year of the Pig: in Muslim Malaysia, brands tread carefully

As Chinese across the world get ready to celebrate the Year of the Pig, in Muslim-majority Malaysia some shopping centres and brands are sidestepping outright representations of the animal to avoid upsetting cultural sensitivities.

Usually shopping malls mark festive occasions with elaborate decorations and attractions, drawing snap-happy crowds - but this year, pigs are off the menu.

Paradigm Mall, a shopping centre in suburban Petaling Jaya, is instead prominently featuring Japanese cartoon icon Doraemon in its decorations, with more than 30 life-size figurines on display.

"We are a neighbourhood community mall which primarily serves the needs of families and the surrounding communities. Hence, all our decorations and activities centre around kids and families as we tie this closely to Chinese New Year culture and tradition. We also ensure that all local council rules and regulations are adhered to," said Paradigm's advertising and promotions group manager Joanne Lee. 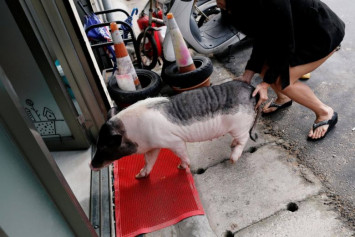 Other malls, too, have studiously avoided any porcine representation, instead using generic New Year imagery such as lions, firecrackers and lanterns. Popular shopping centre 1Utama has, among other decor, set up several oversized "piggy banks" - but otherwise the pig is conspicuously absent.

Although the government has said there are no restrictions on pig imagery, many malls emphasise the importance of adopting a middle ground that takes into account cultural sensitivities.

H.C. Chan, chief executive officer of Sunway Malls & Theme Parks, said while the use of zodiac signs to mark the new year was favoured, it was "not necessary to always use them, though it is the right of the Chinese community to practise them".

"The use of other cultural elements are just as widespread ... in Sunway Malls, we adopted the clan heritage for this year's celebration to pay tribute to the five major Chinese clans which make up 90 per cent of the Chinese community in Malaysia across our malls. We believe this is a more connected and relevant approach," he said.

In Islam, pigs and dogs are considered unclean animals, and some brands practise extreme caution when dealing with pig or dog imagery. In 2018, a popular grocery store printed a Chinese-zodiac-themed T-shirt but with just 10 of the 12 zodiac creatures.

Lego Malaysia, too, is treading carefully this year: although it has sold out of its limited edition Year of the Pig toy gift sets, a life-size model of its Lego Dragon Dance toy set up in a mall had to be slightly tweaked.

"The Lego Lunar New Year campaign started January 1 and till this date, we haven't got any complaints regarding the imagery in decorations and sets. There is currently a life-size model of the Lego Dragon Dance set on display at Mid Valley Megamall, as part of our Lunar New Year campaign," said Sylvie Ting, associate brand manager for Lego Singapore and Malaysia.

Many brands seem reluctant to go the whole hog as far as pig imagery is concerned, although they are nevertheless not shying away from embracing the holiday season.

Luxury handbag brand Longchamp, which has also released a Year of the Pig collection, is not too worried about a backlash as their pig motif is "rather understated and cute this time", and so "the sensitivity level isn't that high". "We have three boutiques in Malaysia and the only mall that is rather sensitive is Suria KLCC. The rest are fine as the major crowds are Chinese, tourists, or urban," said Longchamp marketing manager Jesly Hieng.

The Longchamp Year of the Pig design depicts stylised pig tails, ears and snouts on pouches as well as the iconic Le Pliage Cuir line of bags.

Malaysia has a long history of attempting to remove pigs and dogs from the public sphere. In 1995 it banned the film Babe from cinemas. In 2016, there was public outcry over the word "dog" being used to describe sausages - leading to fast-food chain A&W's Coney Dog being renamed the "Chicken Coney" at the order of religious authorities.

In 2014, activist Syed Azmi Alhabshi was forced to seek police protection after receiving death threats for organising an "I Want to Touch a Dog" event to give Malay-Muslims an opportunity to connect with dog owners and pet canines.

More recently, national carrier Malaysia Airlines' in-flight magazine Going Places had to issue a public clarification after it was accused of publishing a photograph of a pork dish. Although the dish was actually Wagyu steak, the carrier apologised for any offence caused.

The pressure on publishers to tread lightly around barnyard animals also extends to newsrooms: a popular Malaysian newspaper told This Week in Asia that "no overt pig imagery" was allowed, although stylised or cartoon depictions were acceptable.

Although the self-imposed ban is for the benefit of the Malay-Muslim community, many younger Malays don't believe such caution is necessary or warranted.

"Would porcine symbolism reduce patronage or business in, say, malls? I don't think so. It's just that social media things get around faster, outrage builds faster."

Piano teacher Terry Tan, 24, said that while it was silly to avoid an animal that was just a symbolic part of a zodiac, "it's also the right of businesses to make these kind of decisions to avoid negative publicity".

"It's just a little disappointing that it's controversial in the first place."