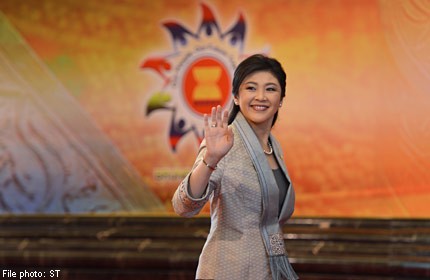 THAILAND - For US President Barack Obama, having an official plane like Air Force One is hardly a subject of debate given the roles he plays and the United States' position as the world's only superpower.

But the fact that PM Yingluck Shinawatra is seeking to have one for her office has whipped up criticism.

The proposal included one plane that would be used as an alternative aircraft to transport members of the Royal family, at a cost of 3.78 billion baht.

To curb opposition sentiment, the PM's Office has avoided saying the new aircraft would be used exclusively by the PM and her Cabinet, leaving it open for use by "important figures".

Supporters of Yingluck have argued that buying a plane exclusively for official use is not splurging, given the more than 30 trips overseas she has made since taking office over two years ago, plus other domestic trips.

Each overseas trip costs more than 10 million baht, as the government has to charter Thai Airways planes. On some days Yingluck travels to three provinces in different parts of the country.

The government also says official planes for the PM and Cabinet are needed in light of the opening of the ASEAN Economic Community in 2015.

Critics argue that taxpayers must foot the bills for extra expenses, not just the cost of the planes, but maintenance costs, plus insurance, parking fees, fuel, pilots and stewardess' salaries and welfare.

When Thaksin was premier, he had an official Airbus 319 ACJ named "Thai Ku Fah", which is the same size as a Boeing 737. The plane was bought for 1.2 billion baht under the budget of the Office of the PM, in accordance with a July 2003 Cabinet resolution, under which Thailand handed over two Super Puma MK2 helicopters worth US$21 million (S$26.6 million) and paid US$30 million to make up the cost of the US$51-million Airbus.

The 151-seat plane was modified to carry 36 seats so extra amenities could be installed for the PM during long trips, such as a personal room, bathrooms with faucets, seats that could be adjusted into beds, VIP seats, a six-seat meeting room with a big table in the middle, rooms for generals who accompanied him, together with 12 business-class seats and 12 economy-class seats.

The plane, luxuriously decorated in earth tones and equipped with communication devices that allowed him to video conference, also featured a satellite communication system through which telephone calls could be made at any time of the day or night. The aircraft carried the Office of the Prime Minister's symbol.

After the 2006 coup, the Thai Ku Fah plane was made a general carrier to transport important officials and it no longer served as an exclusive plane for the PM and Cabinet. The name of the plane was changed to Bor Lor 15 and stationed at the Air Squadron 602 base. The Office of the Prime Minister's symbol was removed.

During the 2011 massive flood, reports had it that the plane was under water at Don Mueang.