Young people must be warned about dangers of Internet addiction 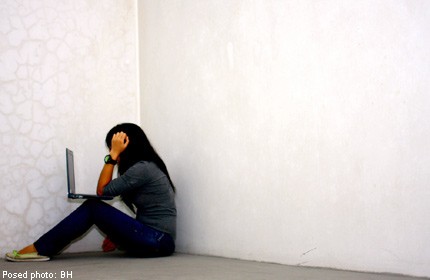 An increasing number of young people are so obsessed with using smartphones and computers that their health and schoolwork are being undermined. Prompt measures should be taken at school and home to deal with this problem.

According to a recent survey by a Health, Labour and Welfare Ministry research team, about 520,000 middle and high school students are addicted to the Internet, particularly for online gaming and e-mailing.

What should not be overlooked in the survey is that a significant percentage of students are believed to be so obsessed with going online that they cannot restrain themselves from accessing the Internet, as is evident from the irritation they express if they have to stop using it. The figure for middle school students stands at 6 per cent, and high school students at 9 per cent.

About 60 per cent of those surveyed suffer from sleep disorders. Their days and nights tend to be reversed as a result of their absorption in the Internet late at night. In some cases, they skip school and confine themselves to their rooms.

The addiction of young people to the Internet during their growth period is ruining their minds and bodies. The situation is extremely serious.

Some young Internet addicts have nutritional disorders due to irregular eating habits. They also show symptoms of deep vein thrombosis, the formation of a blood clot due to long hours of retaining the same seated posture, a condition normally associated with economy-class passengers on airplanes. The deeper the addiction to the Internet, the greater likelihood they will feel depressed.

Medical attention is needed for people who are seriously addicted to the Internet. Keeping a daily record of the number of hours spent using the Internet could make young addicts more aware of their problem. At some hospitals, doctors and clinical psychologists provide counselling.

However, only a few medical institutions have departments capable of providing such people with specialised treatment. It is necessary to nurture specialists with sufficient expertise to cure people hooked on the Internet and create centres to provide consultation services for addicts.

Internet users may feel tempted to gain recognition from or link themselves to others. One example is an online combat game that can be played by a certain number of people. The longer the gamers play, the more skillful they become. In many cases, young people play online games for an inordinate amount of time, hoping to earn praise from other players and experience a feeling of achievement and exaltation. They may find it extremely difficult to give up playing online games.

Another example is absorption in Line, an instant messaging system. Some users are unable to take their eyes off their smartphone and computer screens during their use of Line's chat function, fearing they may be shunned by fellow Line users unless they immediately respond to their messages.

In this day and age, the Internet is an indispensable means of communication for work and daily life. Smartphones are spreading rapidly. There is a strong possibility the number of Internet addicts will increase.

In receiving computer-assisted lessons at school, students should not only be taught how to use electronic devices. They also should be encouraged to realise the danger of Internet addition while learning how to appropriately use smartphones.

In buying their children smartphones, parents should lay down rules on how many hours- and for what purpose - they should be allowed to use them each day.