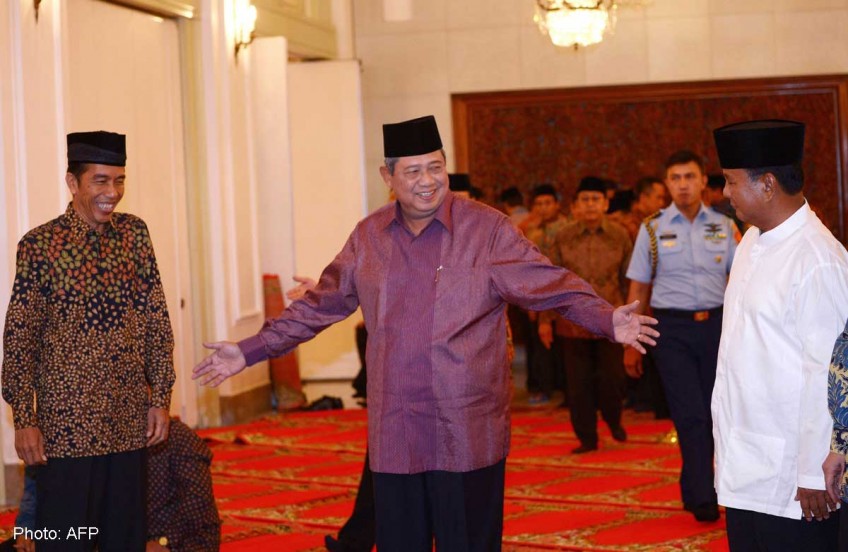 Dr Yudhoyono (centre) with presidential candidates Joko Widodo (left) and Prabowo Subianto at the presidential palace in Jakarta yesterday. The three men broke fast together as Dr Yudhoyono took the opportunity to remind Indonesians of the danger of a divided nation. Mr Prabowo is seeking to delay the announcement of the official election result scheduled for tomorrow.

PRESIDENT Susilo Bambang Yudhoyono reminded Indonesians of the necessity for unity and reconciliation, as presidential candidates Joko Widodo and Prabowo Subianto shook hands before him for the first time since the heated July 9 presidential election.

He hosted yesterday's breaking of fast at the presidential palace to break the ice and cool tensions ahead of tomorrow's announcement of the official result by the Election Commission (KPU), and his words were aimed at the candidates as much as their supporters.

The two men sat on either side of Dr Yudhoyono, and they discussed football, MH17 and food, Mr Joko told reporters later.

In his remarks, Dr Yudhoyono pointed to the conflicts in Palestine and Ukraine as examples of what could go wrong if Indonesia remained polarised.

"The cost will be very high when our nation is divided - to put it back together is not something that is easy," he said.

Yesterday's meeting came as the two-week vote tally entered its final stage, as the KPU added up votes from all 33 provinces. The tally showed Mr Joko won in 23 provinces and Mr Prabowo in 10 - with Mr Joko getting some 53 per cent of votes nationwide.

Both claimed victory hours after polls closed on July 9, citing quick counts of votes by pollsters.

But Mr Prabowo has changed tack, and is seeking to delay the announcement of the official result, even as key supporters in recent days acknowledged the votes were not in his favour and urged him to respect the KPU tally.

He told reporters yesterday that he would not accept the result, as campaign secretary Fadli Zon cited "massive" irregularities and "systemic" cheating. KPU commissioner Hadar Gumay said yesterday that it would not delay the announcement.

Yesterday, dangdut legend Rhoma Irama, who stumped for the former special forces general during the campaign, urged supporters to respect the victor for the sake of national unity.

"Winning and losing is predestined by God Almighty, and we have to accept it even if it does not make us happy," Mr Rhoma said.

"This way, we can show the world that Indonesians can do democracy well," he added, launching a short music video that urged Indonesians to "stop hostilities and stop debating".

In the afternoon, volunteers claiming to be united for Indonesia and a just election gathered and pledged to preserve the peace and not mobilise supporters.

Both armed forces commander General Moeldoko and national police chief Gen Sutarman, who attended the event, said they would be neutral and uphold order.

But key members of the two campaign teams did not attend. Concerns also remain over whether supporters might still demonstrate outside the KPU tomorrow.

Gen Moeldoko issued a reminder that Indonesia's peace and stability must be protected, noting that, until recently, nations such as Egypt and Syria did not think they would be at the "point of no return" they are at now.

"Do we want something like that?" he asked, saying the armed forces walked a "narrow corridor" between safeguarding democracy and preserving stability.

Gen Sutarman drew an analogy with a World Cup football match, saying there had to be a winner.

"We can't have one president by day and another by night," he said.

"We don't need to keep pushing as if this election to select a leader for the next five years is the end of the world."