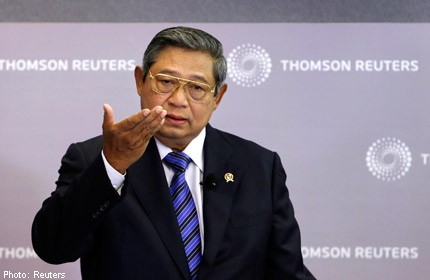 INDONESIA - President Susilo Bambang Yudhoyono has demanded a full review of prison operations and the costs of upgrading jails across the country, as police expanded their search for those who escaped from an overcrowded jail in North Sumatra.

About 118 inmates, among them four terrorists, are on the run. Five people were killed during Thursday night's prison riot, which was sparked by a power blackout.

"I need reports... if the (one trillion rupiah or S$130 million) budget to revamp prisons is not enough, we have to raise it," he told reporters on Saturday.

Before an emergency meeting with his Cabinet at the Halim Perdanakusuma military airbase in Jakarta on Saturday, he chided his ministers for being slow to update him and the public on the riots that saw angry inmates burning the prison.

In fact, reports were already on international media before he got the latest information, he said. The incident highlighted Indonesia's poor prison infrastructure and cramped conditions after it was found that Medan's Tanjung Gusta jail held more than double its capacity - 2,600 prisoners in a facility fit for only 1,054. It has not had a major upgrade since 1982.

It also raised concerns about lax security, coming four months after 12 special forces soldiers broke into Cebongan prison in Yogyakarta and shot dead four prisoners in a revenge killing for the death of one of their colleagues.

Marwan alias Wak Geng - one of 14 caught for the 2010 CIMB Niaga bank heist to raise funds for terrorist activities - confirmed initial findings that a blackout and water shortages had provoked the riots.

"A group of inmates had grown restless after a whole day's blackout also cut off their water supply and they did not have water to bathe or perform ablution for prayers," he was quoted as saying in Tempo daily.

They turned rowdy after a warden ordered them to stay in their cells. "They attacked the warden who ran to his office where the group started the fire," said Marwan, who is serving a 12-year sentence.

On Saturday, Coordinating Security Minister Djoko Suyanto told reporters that a police-led inquiry will be formed to investigate what triggered the riot and conditions at the prison.

Law and Human Rights Minister Amir Syamsuddin told reporters after returning from Medan: "There are 162,000 prisoners in Indonesia and these prisons are at overcapacity... so it is very clear that the budget won't be enough to fix all the prisons.

"Some prisons are in worse conditions than this one in Medan," he added, saying that the work of expanding, upgrading and building new prisons was being done in phases.

Critics remain sceptical of major changes in the short term, noting that revamping Indonesia's prison facilities and system had been discussed for a long time, yet little has changed.