Eight people hurt in the Yuen Long mob attack sued the police chief on Tuesday for compensation, seeking "justice for the victims and for Hong Kong" over the shocking outbreak of violence which became a turning point in the unrest which has gripped the city since June.

The legal challenge was filed half a year after the July 21 attack, in which a group of white-clad men wielding wooden sticks and metal poles indiscriminately went after travellers and protesters, injuring 45.

The attack provoked a public outcry over the police response, with officers accused of colluding with the aggressors by arriving late to the scene and failing to make arrests that night.

Democratic Party legislator Lam Cheuk-ting, who was among the injured, announced on Tuesday that he and seven other victims had filed a lawsuit, demanding a total of HK$2.7 million (S$469, 443) in compensation.

"Our court case is not just for our compensation. We are looking for justice for the victims and for Hong Kong," Lam said. "This was blatant collusion between the police and triads and marks a watershed for Hong Kong. We've been unable to trust the police from that point onwards."

He said he understood the police had received intelligence that an attack could take place at least two days before the incident but did not take precautions, and two officers even left the scene as the attack was happening, without taking any action.

Police have said they were stretched thin that night, as they were forced to deal with a large anti-government protest on Hong Kong Island at the same time.

A total of 37 people - some with links to triads - have been arrested for their alleged roles in the Yuen Long attack, seven of whom have been charged with rioting. Police have said they are continuing to collect evidence.

Lam was unsatisfied that none of those charged was thought to have organised the attack.

After half a year, the scars have not faded for some victims, including a woman who gave her name as Ms Lam.

The 64-year-old burst into tears as she recalled the chaotic scene she witnessed inside the station at about 10.40pm that day. She was travelling home by MTR after participating in the protest on Hong Kong Island. 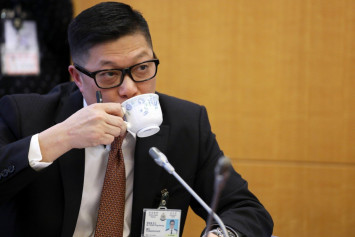 Her legs were injured as she ran from the attackers, and she needed an operation.

"What wrong did we commit by going home?" she said, still in a wheelchair. "I was diagnosed with post-traumatic stress disorder and am taking medication. I just couldn't sleep at night."

Another victim, surnamed So, who is filing a separate suit against police, said he was attacked at about 9pm outside the Yoho mall after he got off from work.

"It is ridiculous for the police to blame protesters for the attack," he said, referring to Senior Superintendent Kong Wing-cheung saying "a group of people had led some protesters to Yuen Long" and that had caused the trouble.

Kong made the controversial remark in a recent television interview and later clarified he was not speaking on behalf of police. So, who reported his case to the police, said he had given officers his verbal evidence but heard nothing back from them.

The Post earlier reported that key witnesses to the incident said they were yet to be interviewed by law enforcement agencies or asked to turn over security camera footage, though a police source with knowledge of the investigation said the accusations were totally unfounded and officers had approached all shops along the affected streets.