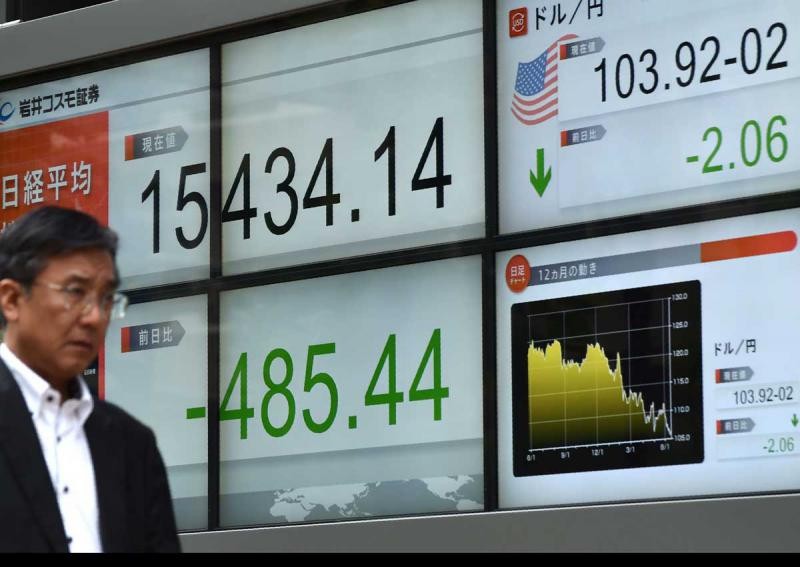 Investors already on edge over a slowing US economy are becoming increasingly spooked by the prospect of Britain leaving the European Union (EU).

Shanghai dipped 0.5 per cent, Shenzhen was down 0.23 per cent, while Singapore's Straits Times Index shed 0.82 per cent.

The British pound slid, touching $1.9103 to the Singdollar, its lowest level since April 8.

While shares and commodities were being battered, the safe haven of gold surged to a near two-year high of US$1,312.87 an ounce in Asian trade yesterday.

The US Federal Reserve still forecasts two rate increases this year but more officials now see only one.

Credit Suisse investment strategist Jack Siu said a September hike remains in play if US employment data picks up substantially in the next few months.

But with more Fed officials expecting only one hike this year, the probability of a delay until after the US presidential elections has increased, he said.

Some economists believe that financial markets have further priced out the possibility of even one rate hike this year.

But while the Fed appears to be less trigger-happy, some economists say the Fed took too long to raise rates after the end of its quantitative easing programme in October 2014, local economists say.

Bank of Singapore chief economist Richard Jerram noted: "Even now, the debate is over the timing of future hikes, not a possible reversal. The US is at full employment with rising inflation, so they will need rate hikes over the next couple of years."

UOB senior economist Alvin Liew agreed, saying: "With just one rate hike so far, it leaves the Fed with little buffer in the event of another economic downturn."

But while the interest rate question has been answered for now, the next big challenge for the markets will be the Brexit vote next week.

Market jitters are likely to continue rising in the days leading to the vote, with economists and bankers warning of severe consequences should the "Leave" vote win.

But in the event it leaves, the impact on the British economy could be as much as 7 per cent of its GDP.

"Immediate impact on financial markets if Brexit prevails would be significant, but less than during the financial crisis episode," said AXA.

This article was first published on June 17, 2016.
Get a copy of The Straits Times or go to straitstimes.com for more stories.