CHITTAGONG, BANGLADESH - Media OutReach - September 19, 2016 - Asian University for Women (www.asian-university.org ; www.auw.edu.bd ) is pleased to announce the appointment of distinguished British political scientist Professor Nirmala Rao, OBE, FAcSS, as the incoming Vice Chancellor of the University effective from February 1, 2017. Professor Rao, an expert on governance of cities, has served as Pro Director of the School of Oriental & African Studies (SOAS) at the University of London where she has also served extended periods as Acting Director. She was elected Fellow of the Academy of the Social Sciences in 2003. Professor Rao has extensive experience of public service and served as an advisor to a range of bodies including the UK Audit Commission and the Office of the Deputy Prime Minister (ODPM). 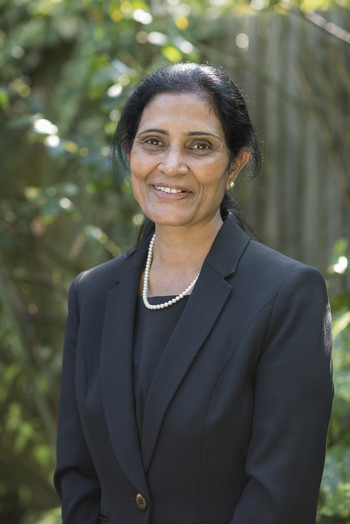 Asian University for Women is pleased to announce the appointment of distinguished British political scientist Professor Nirmala Rao, OBE, FAcSS, as the incoming Vice Chancellor of the University effective from February 1, 2017.

Professor Rao was also a lay member of the General Council of the Bar, an appointed member of the UK Architects Registration Board , Council Member of the Royal Society of Asian Affairs and of the Institute of Education, University of London. She currently serves as a Governor of Trinity Laban Conservatoire of Music & Dance. During the late 1990s, Professor Rao served as an Academic Advisor to the UK Minister for Housing & Local Government and advisor to the Government of Andhra Pradesh, India, and, more recently, as Program Director for the UK-India Leadership Program for Vice Chancellors.

During her tenure at SOAS, Professor Rao had lead responsibilities for, among other things, academic developments, learning and teaching strategy, strategic reviews of centers and departments and international collaborations. It was under her leadership that SOAS successfully obtained Degree Awarding Powers and undertook major reform of the School curriculum and portfolio review of undergraduate courses and postgraduate programs. Prior to joining SOAS as Pro Director in 2008, Professor Rao served as Professor of Politics and Pro-Warden at Goldsmiths College at the University of London.

In announcing the appointment of Professor Rao as the Vice Chancellor, Dr. Dipu Moni, Chairman of the Board of Trustees of the University and former Bangladesh Foreign Minister said, "We are absolutely delighted that Professor Nirmala Rao has accepted our invitation to join AUW as its next Vice Chancellor.  AUW could not have hoped for a more distinguished and able academic administrator to provide leadership to the University as it looks to its second decade of service in educating women of our region for leadership roles.  We eagerly look forward to welcoming Professor Rao to Bangladesh as one of our most honored academic leaders."

"My goal is for AUW to remain an internationally acclaimed university, recognized among the best in the region and providing students with a distinctive, transformative and high quality experience' said Professor Rao.   "By prioritising the student experience in this way, it re-emphasises our commitment to transforming lives -- inspiring our students to live their lives to the best of their potential, and helping them fulfil their dreams," she added.  " There are clear challenges, but also huge opportunities and I look forward to working with colleagues to nurture a culture of aspiration so vital to a successful local and regionally-rooted University."

AUW's longstanding Chancellor Mrs. Cherie Blair also expressed her elation at Professor Rao's appointment.  Mrs. Blair commented: "I have known Professor Rao for a number of years.  She is an experienced, thoughtful and highly effective University administrator.  AUW is indeed fortunate to have a person of such stellar background to lead our institution."  AUW's Founder Mr. Kamal Ahmad expressed similar sentiments:  "In Professor Rao, AUW has found an inspired leader.  She combines a deep understanding of our region and an expertise in driving excellence at a top institution.  I know that AUW will be transformed into a more vital institution under her leadership."

Professor Rao is married to Dr. Gopal Rao who was also awarded an OBE for services to medicine. She has two grown sons: one a gastroenterologist in London and another a resident doctor in the US training in Cardiology.

Asian University for Women is pleased to announce the appointment of distinguished British political scientist Professor Nirmala Rao, OBE, FAcSS, as the incoming Vice Chancellor of the University effective from February 1, 2017.

About Asian University for Women (AUW)

AUW is an international university with an Asia focus located in Chittagong, Bangladesh. AUW has a student body drawn from 15 different countries across Asia and the Middle East, and has graduated over 440 women so far. AUW offers a high-caliber liberal arts education for young women interested in topics ranging from public health to politics to environmental studies. AUW graduates have gone on to work in business, international development agencies, government institutions, and research facilities, always proving their commitment to using passion and leadership to tackle challenges facing their home countries and women around the world. As a network of emerging women leaders, AUW alumnae are growing into Asia's next generation of change-markers.