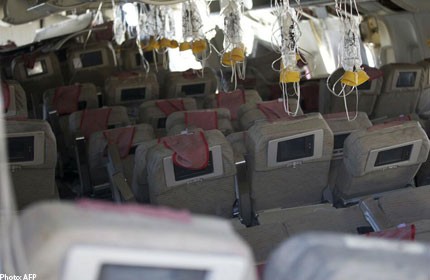 SAN FRANCISCO - The pilot in charge of landing the Asiana Airlines Boeing 777 that crashed in San Francisco tried to correct its course when he saw it was off center and too low as it approached the airport runway at an altitude of 500 feet (150 meters), the head of the National Transportation Safety Board said on Tuesday.

"At about 500 feet, he realized that they were low," NTSB Chairwoman Deborah Hersman told reporters, describing the failed last-second attempts to avoid Saturday's disaster. "Between 500 and 200 feet (60 meters), they had a lateral deviation and they were low. They were trying to correct at that point."

The crash of the Asiana Airlines plane killed two teenage Chinese passengers and injured more than 180 other people.

Hersman, whose agency investigates the cause of plane disasters, said two flight attendants were ejected from the tail-less plane as it crashed.

At her news conference, Hersman said many questions remained about the incident. The flight crew had not been tested for drugs or alcohol after the crash, a requirement for pilots of US-based carriers involved in accidents, Hersman said.

It was not clear if the auto-throttle, which the South Korean airline's pilots said they were counting on to maintain speed, was engaged when the plane slowed to a near-stall just before its tail hit the seawall in front of the runway, Hersman added.

Three of the four pilots on board were in the cabin during the landing, although only two could see the runway, Hersman said, describing interviews by investigators with the crew of plane, which bounced violently down the tarmac and burst into flames after it hit the ground.

Information from the plane's flight data recorder shows the plane was traveling far too slowly as it came in for landing, according to Hersman. While she has declined to speculate on the cause of the crash, much of the information released by the NTSB suggests pilot error as a main focus of the investigation.

The world's largest pilots union rebuked the NTSB for its handling of the crash investigation, saying the agency had released too much information too quickly, which could lead to wrong conclusions and compromise safety.

Releasing data from the flight's black boxes without full investigative information for context "has fueled rampant speculation" about the cause of the crash, the Air Line Pilots Association International said in a statement.

Hersman rejected the criticism. "We work for the traveling public," she said. "We feel it is important to show our work."

Hersman said on Sunday the plane was "significantly below" its intended air speed and its crew tried to abort the landing less than two seconds before it hit the seawall in front of the runway.