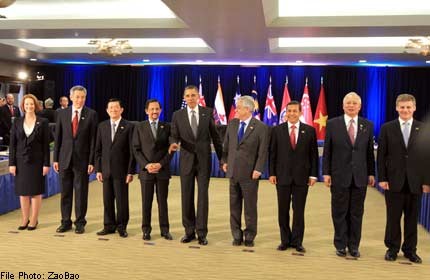 SINGAPORE - Following the recent launch of free trade negotiations between the United States and the European Union, there are now three mega-trade and investment liberalisation blocs being shaped in various parts of the world.

Each is different in geographic coverage. But all have sufficient economic clout to ensure that whichever is first to conclude a credible agreement will have a significant impact on international trade and geopolitics.

With multilateral negotiations under the World Trade Organisation stalled, the big bloc negotiators are, by default, setting key rules and standards for global commerce in the 21st century.

This is important. All three mega-blocs are often referred to as free trade arrangements. However, in practice, they would be preferential trading blocs discriminating against non-members.

Of course, the three top economies - the US, China and Japan - have to be big players in this game. Each seeks stronger influence and market access, particularly in Asia, where economies, trade and investment have been expanding fast for several decades.

Still, the US-EU deal would span the Atlantic, stimulating growth by integrating the world's two largest trading zones that account for approximately 40 per cent of global gross domestic product (GDP), at least for now.

The other two proto-free trade agreements (FTAs) are tied to Asia.

One, the Trans-Pacific Partnership (TPP) linking North and South America to the Asia-Pacific region, will start its 18th round of negotiations in Kota Kinabalu, Malaysia on Monday.

When Japan joins the talks, probably on July 23, the 12 negotiating states in the TPP will account for nearly 40 per cent of global GDP and about a third of all international trade.

The first round of negotiations to form the other Asia-linked trade bloc, the Regional Comprehensive Economic Partnership (RCEP), was held in Brunei in May.

With one-third of global GDP and the expectation of much faster than world average expansion, the RCEP's heft is less than that of the TPP but still considerable.

In the global mega-bloc negotiations, the US is in talks with Europe as well as in the TPP. Japan is in both the TPP and RCEP.

Meanwhile, China is only in what is, arguably, the weakest and least ambitious of the two Asia-linked trade and investment groups.

This worries China, which has relied heavily on foreign trade and investment for economic growth and employment.

China has accused the US and Japan of using the TPP as an exclusive mechanism to stunt China's future growth, just as the US and its Japanese ally are cooperating more closely to counter China's increasing military strength.

But in the past few months, China's attitude to the TPP has moderated to the point where some Chinese officials and analysts are saying openly that Beijing should seek to join the TPP talks.

China is, after all, the second- largest trading partner of the US after Europe. It is also the US' third-biggest export market, and its biggest source of imports.

China cannot afford to be locked out of both the TPP and the US-EU Transatlantic Trade and Investment Partnership.

The US and EU started detailed negotiations on their planned pact in Washington on July 8, with the aim of reaching a conclusion by late 2014.

The TPP deal is supposed to be finalised by the end of this year, and the RCEP by 2015. In a significant development, the US and China last week agreed to restart long-stalled negotiations on a bilateral investment treaty.

Chinese officials have said that if this leads to reduced investment restrictions on both sides, it could pave the way for China to join the TPP.

In May, the Global Times, an offshoot of the Chinese Communist Party mouthpiece, the People's Daily, published an article noting that the TPP had been seen as part of a US-led move to isolate and encircle China.

The paper said that while this concern should be carefully considered, it obscured the urgency of conducting deeper market-oriented reforms in China itself.

"The real lesson China has to learn is how to be completely market-oriented to match the rapid development of the new free trade zones such as the TPP," the Global Times article added.

China is probably not yet ready to bid for TPP membership.

It will first need to push ahead with its own economic reforms. Beijing will also watch to see how successful Japan and communist- ruled Vietnam are in protecting their economic interests in the closing stages of the TPP negotiations.

Nonetheless, the signs of a more flexible approach are promising.

China's deputy international trade negotiator at the Ministry of Commerce Yu Jianhua told an FTA forum in Qingdao last month that the TPP and RCEP had "common ultimate goals and will be the stepping stone for integrating Asia-Pacific's FTAs if they are inclusive, open and transparent".

Melding the TPP and RCEP would be a difficult economic challenge. But if they are no longer seen as competing blocs in a new Asian cold war between China and the US, it would be easier to treat them as mutually reinforcing pathways towards a Free Trade Area of the Asia Pacific.

The writer is a visiting senior research fellow at the Institute of Southeast Asian Studies.