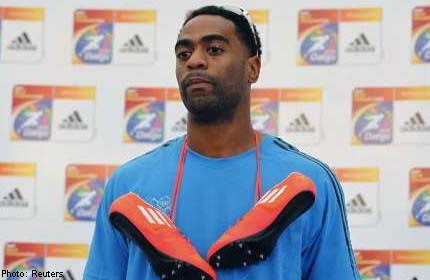 File photo of US runner Tyson Gay.
High-profile sprinters Tyson Gay (above) and Asafa Powell both failed controls for proscribed substances, sending shockwaves through athletics just over a month away from the world championships in Moscow.

PARIS - Calls mounted on Monday for more stringent punishments for dope cheats in athletics and tighter controls on food supplements after two of the world's fastest men returned positive tests for banned drugs.

High-profile sprinters Tyson Gay and Asafa Powell both failed controls for proscribed substances, sending shockwaves through athletics just over a month away from the world championships in Moscow.

The International Association of Athletics Federations (IAAF) responded by saying that the results were an indicator that its drug-testing programmes were effective.

"The credibility of our anti-doping programme, and the sport of athletics, is enhanced, not diminished, each time we are able to uncover a new case and we have the committed support of every athlete, coach or official who believes in clean sport," it said.

But current and former athletes, as well as administrators, expressed concern at the wider impact of the news - and called for a tougher line on drug cheats.

The 1996 Olympic 100m champion Donovan Bailey, of Canada, described the revelations as "very sad for the sport" and "very disappointing".

"It's two of the veterans in track and field that I would never have expected this sort of news," he told Sky Sports News television. "I hope there will be some sort of explanation."

Britain's Denise Lewis, who won heptathlon gold at the 2000 Olympics, added: "It knocks the sport.

"It damages the confidence that people have, not only in the Jamaican team but the US team, because they've had a big drugs scandal some years ago."

A recent series of drugs scandals in athletics suggests that the sport has yet to shake off the scourge of doping, with retrospective testing forcing the International Olympic Committee to re-award medals sometimes up to eight years later.

Before the last world championships two years ago, where the IAAF introduced biological passports for athletes, Jamaica's Steve Mullings, who had previously been sanctioned for testosterone use in 2004, was banned for life after he tested positive for a masking agent.

Four other Jamaicans, including the main rival to double Olympic champion Usain Bolt, Yohan Blake, tested positive for the stimulant methylhexanamine before the 2009 edition and were banned for three months.

The 2003 championships were held in the wake of US Anti-Doping Agency (USADA) revelations about the BALCO scandal, in which high-profile athletes, including US sprinter Marion Jones, were supplied with performance-enhancing drugs.

Gay, who was one of the figureheads of a USADA programme against the use of performance-enhancing drugs, and Powell on Sunday confirmed separately that they had tested positive for a banned substance.

The US sprinter, the 2007 100m champion and the fastest man over the distance this year, and the Jamaican, a former world record holder in the straight sprint, both then withdrew from the world championships.

Gay, who is awaiting the results of his B sample after the stimulant, oxilofrine, was detected, said he had "never knowingly or wilfully" taken any banned substances.

Adidas, however, said they had suspended their contract with Gay, invoking a clause dealing with doping violations.

Powell was reportedly one of five athletes who failed drug tests at Jamaica's national trials last month in Kingston, amid claims that a food supplement was to blame and a supplier arrested in Italy.

The Italian news agency ANSA, however, said on Monday that no arrest had been made.

Britain's 4x100m relay gold medallist from the 2004 Olympics, Darren Campbell, meanwhile called for a life ban for all drug cheats.

"Who does it need to be before you go 'okay, enough's enough'? It's ridiculous," he said.

The former director of ethics and anti-doping at UK Sport, Michele Verroken, said the authorities needed to act to regulate food supplements and hold suppliers to account.

"This problem has been going on for over a decade," Verroken, who now runs the Sporting Integrity consultancy, told Sky Sports News.

"We haven't seen suppliers regulated. Our athletes are at risk. If athletes are taking the wrong information why aren't there regulated practices to advise athletes and take the responsibility for any subsequent positive tests?"