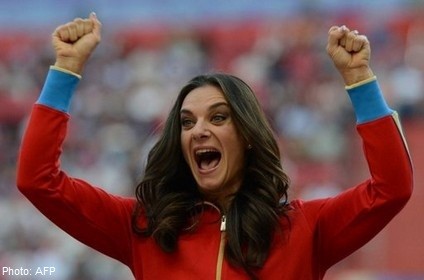 Russian pole vault star Yelena Isinbayeva kicked up a storm on Thursday when she said in Moscow she supported the law signed by President Vladimir Putin in June which punishes the dissemination of information about homosexuality to minors.

MOSCOW - Russia's anti-gay propaganda law continues to hang over the world athletics championships like a depressing pall, and in the absence of fans or superlative performances it threatens to become the uneasy, abiding memory of the Moscow event.

With Russia due to hold the Winter Olympics next year and football's World Cup in 2018 the Government's stance, popular at home but fiercely at odds with many of the countries due to take part and already condemned by US President Barack Obama, is likely remain a touch-paper for protest.

The International Olympic Committee (IOC) has asked the Russian government for a clear translation and a clarification of how the law will be applied during the Sochi games and Yelena Isinbayeva played the "misunderstanding" card on Friday when she sought to defend her anti-gay comments that caused such a stir on Thursday.

"English is not my first language and I think I may have been misunderstood when I spoke yesterday," the newly-crowned pole vault world champion said in a statement.

"What I wanted to say was that people should respect the laws of other countries particularly when they are guests.

"But let me make it clear I respect the views of my fellow athletes, and let me state in the strongest terms that I am opposed to any discrimination against gay people on the grounds of their sexuality (which is against the Olympic charter)." Isinbayeva, who is one of Russia's most popular sportswomen, caused international uproar on Thursday when she spoke out in favour of her country's recently-adopted law that bans some aspects of the promotion of homosexuality.

"Maybe we are different than European people and people from different lands. We have our law which everyone has to respect. When we go to different countries, we try to follow their rules," said the vastly experienced athlete who regularly speaks English to journalists.

"We are not trying to set our rules over there. We are just trying to be respectful.

"We consider ourselves, like normal, standard people, we just live boys with women, girls with boys... it comes from the history." Isinbayeva, who has now faced calls for her resignation as an Olympic youth ambassador, had been asked for her views after several Swedish athletes had painted their nails in rainbow colours in support of the gay movement.

American 800 metres runner Nick Symmonds said he was shocked by Isinbayeva's comments and that he had been told he risked jail if he wore a rainbow badge.

"It blows my mind that a young, so well-educated woman can be so behind with the times," Symmonds told BBC Radio 5 Live.

"Guess what Yelena, a large portion of your citizenship are normal, standard homosexuals." The law, passed in June and that appears to have the widespread support of the Russian people, is already threatening to be a constant shadow over next year's Sochi Winter Olympics, where athletes, officials and fans will have to operate within its boundaries.

Social commentators in Russia have said that the country is likely to adopt something of a siege mentality in the face of worldwide condemnation and that a change in the law, which is broadly popular with the conservative majority, would be considered an unthinkable loss of face.