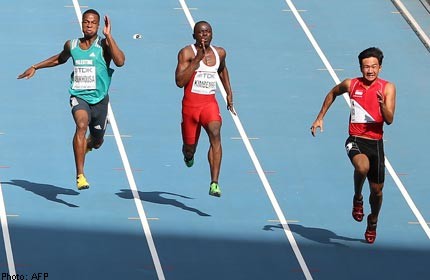 SINGAPORE - Singapore sprinter Calvin Kang equalled his personal best of 10.52 sec in the men's 100m preliminaries of the World Athletics Championships in Moscow on Saturday.

But the 23-year-old, who won his preliminary race on Saturday morning to qualify for the heats in the evening, failed to better his time in the second race.

He finished last among eight runners and failed to qualify for Sunday's semi-finals.

Before leaving for Moscow, Kang, who took a year off his studies at Nanyang Technological University to train full-time, had announced his intention to go below the 10.50 mark at the Championships.

Kang, who represented Singapore at the 2008 Beijing Olympics, and won a silver with the 4x100m relay team at the 2011 South-east Asia Games, is making his debut at the world meet, held in the Russian capital from Aug 10-18.

He replaced teammate Gary Yeo, who was expected to compete in the men's 100m on a wildcard entry, but missed out after aggravating his hamstring at the Asian Athletics Championships last month.