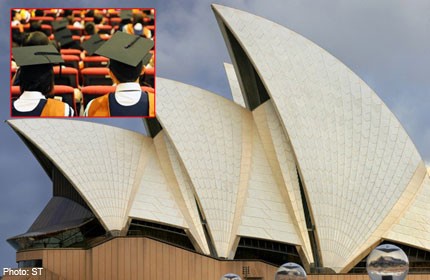 A HSBC study from earlier this month ranked Australia as the most expensive country for foreign students.

If parents want to send their teenage children for tertiary education in Australia, they may need to set aside close to $50,000 per year, per child.

This is according to figures released by HSBC earlier this month based on research data on higher education in 13 countries around the world that ranks Australia as the most expensive country for foreign students. The report stated that the combined average cost of university fees, plus living expenses comes up to about US$38,000 (S$48,575) per year.

Singapore was also featured in HSBC list at the sixth spot costing foreign students about US$24,000 annually.

The Australian education sector suffered a 12 per cent drop in international enrollments between 2009 and 2012, but nevertheless it has remained a popular destination for international students with a 2011 study showing that 21 per cent of Australia's entire student population was from overseas, proportionately higher than Canada, UK, and the US (13 per cent, 18 per cent and 3 per cent respectively).

Despite the high costs, Australia is set to attract more students with the value of its dollar falling and improved visa processing, revealed the HSBC study.

"While Australian universities may have seen a dip in international enrollments in recent years, the falling Aussie dollar and simplified visa process should spark a resurgence in overseas students placing Australia on top of their destination lists."

But Singaporeans paying for university fees and rent in Australia can have some respite due to the lower Australian dollar in the past few months.

The Sunday Times reported that the Australian dollar had hit a three-year low against the US dollar last week. It has been retreating against the Singdollar over the past four months. While A$1 would have cost S$1.30 in April, it stands at just S$1.16.

The HSBC findings were calculated based on the average tuition cost for international students of the top 10 largest institutions in each of the countries surveyed.

The research revealed that while Australia topped the list, US followed a close second with annual costs of about US$35,000 and UK is third, costing foreign students about US$30,000.

Meanwhile Germany was listed as the cheapest for foreign students with annual costs averaging about US$6,000.