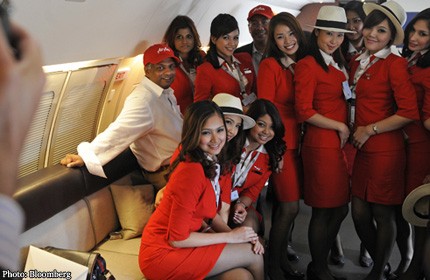 KUALA LUMPUR - For Tony Fernandes, it's always one thing or another!

The maverick-owner of Asia's largest budget carrier got a dressing down on Tuesday by the country's Transport Ministry over the propriety - or the lack thereof - of the uniforms worn by his female flight attendants. And the Transport Ministry seems to want a cover-up, or at least a review of the airline's dress code.

All Air Asia female flight attendants, many of whom are Muslim-Malays, generally dress in bright red jackets over white blouses and slightly-above-the-knee skirts. It's the last item that seems to make the ministry see red. It told Parliament in a written reply on Tuesday that it would ask the budget carrier to reassess the uniforms to better "reflect the Malaysian culture".

The issue surfaced after a Kelantan lawmaker from the United Malays National Organisation, Ikmal Hisham Abdul Aziz, commented that the airline's uniforms were "sexy" and "did not reflect the national identity". He did not specify what the national identity was, or is. The MP then asked if dress code guidelines were imposed on an airline when its licence was issued.

"Airlines have to abide by the safety standards, among others, and comply with emergency evacuation in the allotted time, as set by the Civil Aviation Department and the International Civil Aviation Organisation," acting Transport Minister Hishamuddin Hussein said, seeming to skirt the issue.

"Airlines including AirAsia are free to choose their uniforms as long as it complies with the criteria set by the authorities." Again, he did not specify what the criteria is.

Proclaiming Mr Azran to be "an insolent Malay" to a packed House of Representatives, Mr Bung said Mr Azran should emigrate if he was not happy in Malaysia. The House was, however, spared a further tirade when Speaker Pandikar Amin Mulia advised Mr Bung not to use his Parliamentary privileges to launch attacks on civilians and government officers who could not defend themselves.

Mr Bung's remarks show that Umno's members are still smarting over Mr Azran's criticism of Utusan as "racist". To recapitulate, the paper had gone on a rampage against Mr Azran after the latter was critical of the paper's extreme anti-Chinese views in the wake of the May 5 general elections which saw the community desert the ruling Barisan Nasional coalition in droves.

Since then, no one, not even the chief executive of CIMB Bank, Nazir Razak, has been spared. Without specifying the paper, Mr Nazir, younger brother of Prime Minister Najib Razak, had defended Mr Azran's "forthright views" as "the mark of a leader". Utusan, and several pro-Umno blogs, flayed him for those sentiments.

Mr Fernandes has chosen to remain silent. He did not respond to a query from BT.