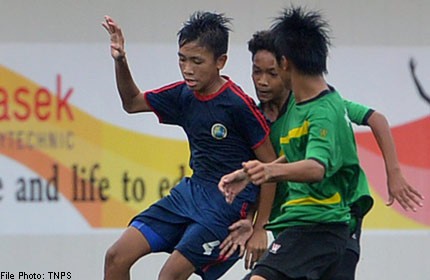 SINGAPORE - He could have been in Nanjing for the Asian Youth Games if he hadn't been dropped after the Singapore Under-14s' training tour to Japan.

However, the Cubs' loss turned out to be Hong Kah Secondary School's (HKSS) gain, as Nuri Irfan Mohd Rashid scored the winner against Jurongville Secondary School (JVSS) in the Schools National C Division football final at Temasek Polytechnic on Wednesday.

The pint-sized midfielder volleyed home off teammate Zuhailee Azlee's free-kick in the ninth minute, just after their opponents had missed taking the lead.

On top of helping his school retain the title, Nuri also clinched the Most Valuable Player Award for the tournament.

The jubilant Sec 2 student told The New Paper: "I felt really happy after I scored the goal because it was the only one during this big game.

"In my head, I was thinking that if I missed this chance, I would never get it again.

"I was very disappointed (when I was dropped for AYG), but I learnt something from that and the win definitely makes up for that."

The match was a tight affair, as suggested by the 1-0 scoreline.

Although HKSS got the only goal, it was JVSS, playing in their first C Division final, who created more chances throughout the 60 minutes.

One such chance came before Nuri's winner.

JVSS were awarded a free-kick after a Hong Kah defender made a backpass to goalkeeper Muhd Hifzhil Iman, who made the subsequent catch after the initial shot cannoned off his own player.

HKSS coach Mohamed Zainudeen was understandably delighted with his boys, saying: "What else can I ask from them? Physically, we look smaller than Jurongville, but I think we competed in every aspect of the game.

"I was dumbfounded by Nuri's goal - it was superb. We were working on our set-pieces, but that was a really clinical one.

"He was very down (after being dropped from the AYG squad) and we had to pick him up and bring him back."

While he was animated during the match, JVSS coach Dilwant Singh was gracious in defeat.

He said: "We gave them a fight to the end and the boys never gave up.

"We created more chances, but we just didn't put the ball in the back of the net while Hong Kah took their chance.

"To their credit, Hong Kah played a very good tactical game and I thought it was a very entertaining game."