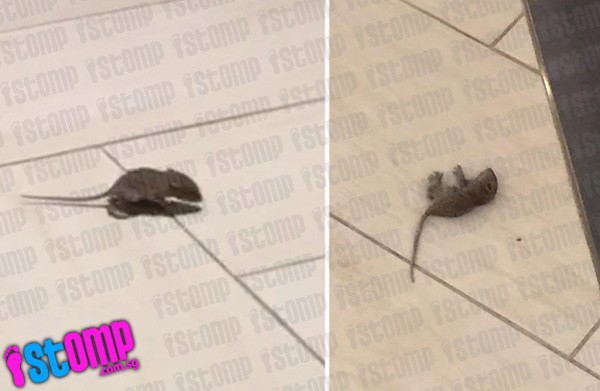 SINGAPORE - A customer at a cafe in Marina square was having a coffee yesterday (Feb 4) and was shocked when a baby rat fell from the false ceiling.

According to the man, Ah Heng, who emailed citizen journalism site Stomp, the incident occurred at about 8.55pm.

"My wife and I were having coffee at a Marina Square cafe, we were shocked and surprised when a baby rat fell from the false ceiling!

"Seems like the rat issue is not resolved yet.

"Due to the commotion, someone went to inform the staff. In the end, a staff member swept the rat away with the broom.

"We were really very surprised that this incident happened, because we thought the rat issue has been solved since NEA has allowed Hotpot Culture to re-open."

Hotpot Culture was previously suspended by the National Environment Agency (NEA) after a diner found a dead rat in pot of salted vegetables last month.

Upon investigation, rodent activity was also found in 14 stalls and restaurants in Marina Square.