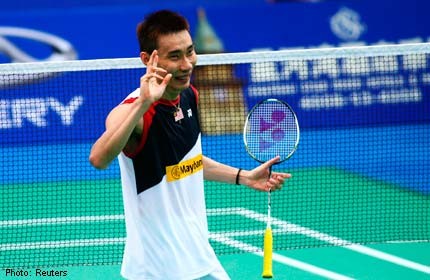 China's badminton superstar Lin Dan made it through to the quarter-finals of the world championships on Thursday, with arch-rival Lee Chong Wei also booking a place.

"Super Dan" made a shaky start against Malaysian Chong Wei Feng, who surged to a 7-2 lead in the first game of their third-round match in Guangzhou.

Defending champion Lin, who had not been stretched in his first two matches, came under pressure from 15th seed Chong and was forced to dive around the court as his opponent found all the angles.

Lin vented his frustration, talking to himself and hitting his head with his racket in the first game after he sent a shot wide.

"I didn't have a good start because we had only played two matches before and I wasn't used to his style and tactics," Lin said after the match.

"For the first 11 points he had a lot of confidence and that created problems for me, but I found a way to adjust and got back into the match."

The Olympic champion, who has been on the sidelines for the past year to spend time with his family and entered the tournament on a wildcard, eventually took the first game 22-20 after Chong saved two match-points.

Lin pumped his fist as the crowd roared his name, and the hard-fought game saw line judges repeatedly called on to court to mop up perspiration.

A more relaxed Lin went on to dominate the second game, taking it 21-10 as the Malaysian lost his confidence and made more errors.

Fans are hoping for another classic showdown between Lin and world No. 1 Lee Chong Wei of Malaysia, who sealed a convincing 21- 12, 21-7 win against 14th seed Wang Zhengming of China.

Lee put in a powerful performance against a tenacious opponent, which contrasted to his nervy second-round struggle.

He unleashed smashes which Wang was unable to reach, placed precision shots and defended with lightning reflexes.

Lee comes into the championships off wins in South Korea, Indonesia, India and Malaysia and is hoping to break a run of losses against Lin, who beat him in the last two Olympic finals and the previous world championships final.