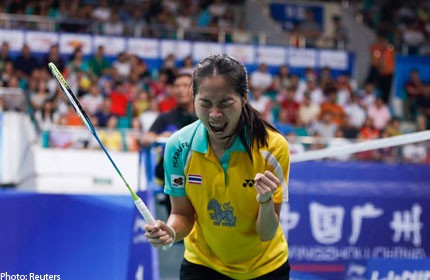 Ratchanok, 18, becomes the first ever Thai player to win gold at the world championships after defeating 22-year-old top seed Li, who was gunning for her first world title.

The three-game thriller was a battle of brilliant technical skills and stamina, with Ratchanok pushing a more experienced Li around the court with a huge repertoire of shots. Ratchanok came back from 19-12 down in the first game to clinch it by two points, with a grim-faced Li fighting back to take the second.

But the supremely relaxed Thai looked physically and mentally stronger in the final game, holding on to a lead even though Li threw everything at her.

At the end of the match Ratchanok dropped to her knees in tears on court before bowing to an applauding stadium.