Badminton: A shame world isn't making a racket about Lin 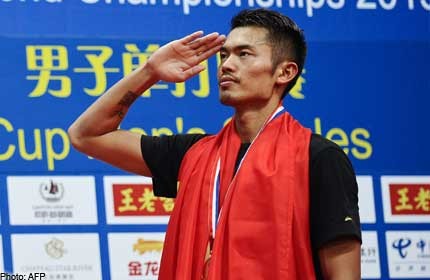 But Lin hasn't made that leap. It is sad because his story this year, in any other sport, would have had commentators choking up and SeaBiscuit-inspired scriptwriters shouting "feature film".

ASIA - On Sunday, one of the very best athletes in the world, who is the very best player possibly ever of his sport, won the second-biggest title in his sporting world.

And most of the world yawned.

This fellow wasn't found on espn.com and didn't show up on cnnsi.com. Didn't rate a mention in the guardian.com nor a word on thetimes.co.uk. I even asked the wisest Aussie sports writer I know and he apologetically conceded he had never heard of him.

Oh, there was poetic prose to be found on the unpoetic Jason Dufner, the PGA Championship winner with a frozen face. There was delicious exaggeration about the delightful Mo Farah, who was considered by the odd English writer - post his 10,000m world title - as worthy of sitting alongside Lasse Viren, Emil Zatopek and Paavo Nurmi. No, he isn't, not yet.

But of Lin Dan - five world championships now, five All-England titles, two Olympic singles golds, one Asian Games singles gold - no mention. This man is a genius whose game doesn't travel far. If this isn't a pity, what is?

Of course, Lin Dan couldn't give a *&^ per cent$ that he has a limited identity outside Asia because he's usually too busy tearing off his shirt. The only person who didn't seem to care that the air-con was switched off during the final was him, only because he's adept at keeping his competitive cool.

But badminton should care that its champion is ignored beyond certain borders.

Badminton should worry that even badmintoneurope.com weren't celebrating Lin on their front page on Monday morning. Sure, Boe & Mogensen - which sounds like a Danish clerical firm but in fact are the doubles silver medallists - deserved a front page picture on the site, but so surely did this Chinese god of the shuttle who made history on Sunday.

Sport operates according to a shifting caste system. Talent and worth are never equally rewarded and in real life teachers remind us of that every day. Women earn less than men in sport. Basketballers grab more headlines than volleyballers. And badminton players feel envious of tennis stars.

Popularity is a complicated equation. Marketing is vital which is how the NBA, a US sport but with a brotherhood of international players, has infiltrated the world.

Tradition is useful, which is how tennis, with every slam over a hundred years old, stays relevant. Geography is vital for it ensures that sports played in western nations, with powerful media, communicating in English, are more widely written about.

Badminton simply has its equation all messed up: It is primarily an Eastern sport, it is non-English and it is played by athletes who engage insufficiently. It is marketed too gently and if its All-England event has a history stretching over a century, its world championship began only in 1977 and its Olympic participation in 1992.

Even as this hurts the width of Lin's appeal, greater fame should still run his way. After all, other athletes have escaped their limited geographies through a combination of genius, beauty, gimmick, nickname and personality.

Annika Sorenstam played golf brilliantly, and against brilliant men, and dazzled; Yelena Isinbayeva soared and seduced those who visited neither track nor field; and skiing's "Herminator" was known of by even those who think piste involves something alcoholic.

But Lin hasn't made that leap.

It is sad because his story this year, in any other sport, would have had commentators choking up and SeaBiscuit-inspired scriptwriters shouting "feature film".

Multiple champion - takes a year off for family - falls to No.286 - isn't match-fit - meets his old rival - is down in the last game - wins and then helps his cramping rival onto a stretcher.

Helluva tale. But with little detail. How fast he smashes, what he thinks under pressure, where he finds the will from, nothing we know. Badminton is a sport without adequate information. The world should be moved by Lin, yet it doesn't know Lin.

For 14 years, the Laureus awards have lauded mainstream stars and alternative athletes. They have hailed nominees from weightlifting and others from rowing. But never Lin. Not once.

Maybe I should send them a tape of Sunday's final. Just to show them how a 176cm man covers the court so finely you think he's a much taller man; how he folds his body during lunges but mentally never folds; how he tactically teases and then physically rises for a smash like a man taking an invisible elevator; how he produces a tapestry of touch at the net of Federer-esque beauty.

How does so much of the world ignore this man? And isn't it a damn pity? Actually, maybe it isn't. Maybe never seeing Lin Dan is simply their loss.