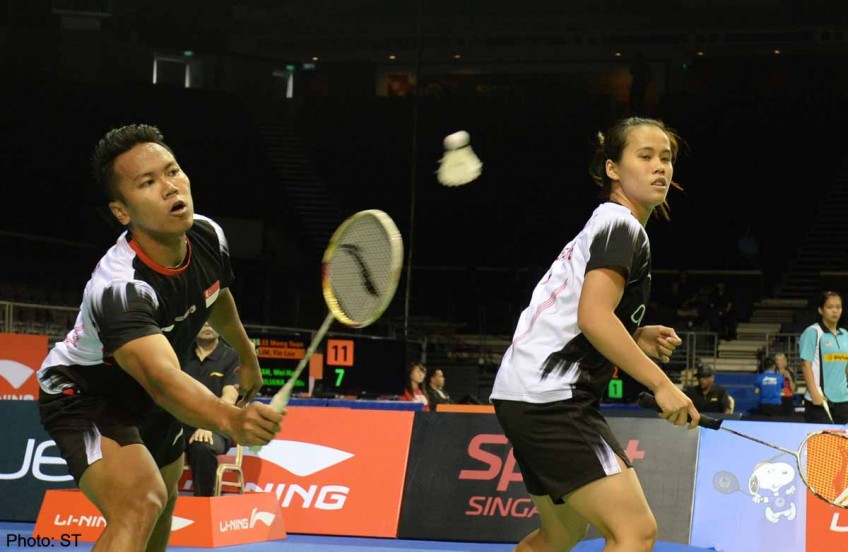 He cannot ask for a tougher start.

Wong is not the only local shuttler who has his work cut out at the event, which will be held at the Singapore Indoor Stadium from April 7 to 12.

The Republic's women's doubles pair of Vanessa Neo and Shinta Mulia Sari will take on second-seeded Reika Kakiiwa and Myuki Maeda of Japan in the first round of the main draw .

Despite the tough draw, Neo vowed to give her best performance.

She said: "The OUE Singapore Open tournament will allow us to acclimatise ourselves to the court conditions as we'll be using the same venue for the upcoming SEA Games."

No reason was given for her withdrawal.

World No. 4 Marin stunned China's Li Xuerui at the world championships last year to become the first Spaniard to take the world title.

Earlier this month, she beat India's Saina Nehwal at the All-England Open to win her first SuperSeries event.

With Marin out of the way, China's world No. 7 Wang could meet 2013 world champion Ratchanok Intanon of Thailand and top seed Saina Nehwal of India in the quarter-finals and semi-finals respectively.

Despite her strong head-to-head records against both opponents (8-0 against Intanon and 8-2 against Nehwal), Wang is not underestimating her opponents. "Besides them, there are other decent players taking part in the tournament," said the Chinese.

"It will all depend on their performance on the day itself and I will focus on giving of my best."

Men's singles defending champion Simon Santoso will once again start in the qualifying draw, where he will face Dane Emil Holst.

OUE Singapore Open organising chairman Ng Yoke Weng said that the potential top clashes in the early rounds of the tournament will provide lots of entertainment for badminton fans.

"The draw this year will surely create much excitement and draw badminton supporters from both local and international shores," said Ng.