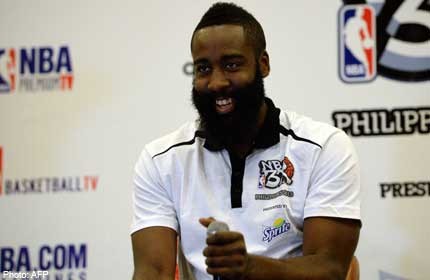 NBA player James Harden of the Houston Rockets at a press conference for the NBA 3X Asia pre-season games earlier this year.

MANILA - The Indiana Pacers and Houston Rockets arrived in the basketball-mad Philippines Monday for the southeast Asian nation's first ever NBA pre-season game.

Arriving on separate chartered planes, the teams were met by organisers on the tarmac before being quickly whisked away on tour buses ahead of their clash on Thursday.

A throng of press photographers jostling against security officials bore testament to the intense interest the clash is generating in the Philippines, which this year hosted the FIBA Asia Championship, losing in the final to Iran.

Organisers said ticket sales have been brisk despite the steep price. By Monday afternoon, the only available seats were courtside, costing between $770 and $1,200 - around 80 times the average daily wage of an ordinary labourer in Manila.

Much of the focus has been on the Rocket's point guard Jeremy Lin, the first American-born player of Asian descent in the league whose breakthrough season in 2012 led to a global following dubbed "Linsanity".

Mark Anthony Marquez, a college student, said he was disappointed to miss out on cheap tickets in the bleachers which had quickly sold out. "Maybe I will camp out at the arena," he said.

The Philippines, a former US colony, has had a long love affair with basketball.

Makeshift courts are found in street corners throughout the country, and parents often name their babies 'Kobe' and 'Michael Jordan' after popular NBA players.