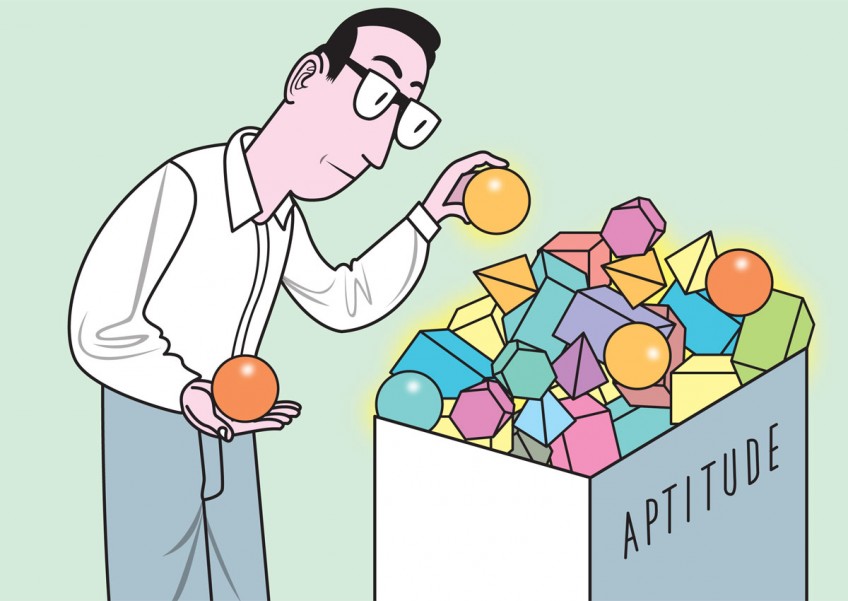 Education Minister Ong Ye Kung's move to expand aptitude-based admissions in universities, polytechnics and the Institute of Technical Education (ITE) is a timely one.

But should he have been bolder? Instead of setting aside 15 per cent of the places for aptitude-based admissions, could he have gone all the way to making aptitude key to 100 per cent of university admissions?

Mr Ong, who oversees higher education and skills development, announced last week that the polytechnics and ITE will go beyond grades for 15 per cent of their enrolments, and assess an applicant on his interests and on whether he shows the potential to do well in his course of choice.

The National University of Singapore (NUS) and Nanyang Technological University (NTU) still use a points system, which converts grades into an aggregate score, to admit the majority of their students.

Mr Ong announced that they too will be able to admit up to 15 per cent of students based on their unique strengths and talents.

Currently, they set aside only 10 per cent of the places for the scheme, called the discretionary admission scheme.

Seen against the backdrop of the SkillsFuture movement to harness the collective aspirations and talents of Singaporeans, the expansion of the pathway makes good sense.

As Mr Ong argued in Parliament, when people are able to choose and enter courses they are truly interested in, they are likely to do better.

There is research to back this up.

Ministry of Education studies have shown that for students with similar O-level aggregate scores, those who are admitted to polytechnics via the aptitude-based admissions do better in their studies, have lower dropout rates and are far more likely to embark on careers in the sectors for which they are educated and trained.

The universities, which have been admitting a small number of students through the discretionary admission scheme since 2004, also report that these students not only keep up with their peers, but that several also go on to excel academically as they are passionate about the field.

The expansion of aptitude-based admissions is just one of the ways in which Singapore's higher-education sector must evolve, said Mr Ong, who stressed that the country is at an inflexion point, at the threshold of major changes in its society and economy.

Based on this, why limit aptitude-based admissions to only 15 per cent?

Shouldn't all students - 100 per cent of them - be admitted based on their interests, talents and aspirations?

I can already hear the howls of protest from parents paying thousands of dollars to top tutors to ensure that their kids ace the A levels. But hear me out.

First, aptitude-based admissions do not mean that you do not take academic grades into account.

One of the first things that admission dons look for is whether an applicant will be able to handle the rigours of degree studies. No point in admitting someone who will not be able to pass the exams.

The universities also have minimum grade requirements for subjects related to the course of study.

For engineering, for example, a pass in higher-level maths is a requirement. For law, at least a B in General Paper.

Second, four of the six universities - Singapore Management University, Singapore University of Technology and Design, Singapore Institute of Technology and SIM University (UniSIM)- which account for about 25 per cent of the university intake a year, already use aptitude-based admissions to take in all students. They use various means of assessment, including personal essays, interviews, portfolios and even aptitude tests, such as coding tests for computing. If this is not aptitude-based admissions, then what is?

To choose future doctors, for example, the admission criteria include multiple mini-interviews, where applicants are interviewed by doctors, other healthcare professionals, patients or social workers. They are evaluated on their thinking, and skills such as empathy and teamwork. They are also assessed on how they make judgments in real-life scenarios.

Since the switch to the multiple interviews, NUS has netted students from diverse backgrounds, from a wider range of junior colleges (JCs) and polytechnics.

The medical students from the polytechnics and lesser-ranked JCs have been tracked. They keep up with their peers in terms of grades. Some have even made it to the dean's list of the top 10 per cent performing students.

Now, imagine choosing our doctors based on grades alone. Considering how expensive medical training is in terms of taxpayers' money, wouldn't society want future doctors to be compassionate and caring? Similarly for any caring profession, be it nursing, teaching or social work.

The country struggles with a shortage of engineers while hundreds of trained engineers abandon the profession to drift into other fields. Getting a sense of whether a candidate is really interested in engineering might have lessened such leakage.

The same applies to the arts, social sciences and business. NUS' Faculty of Arts and Social Sciences has, in recent years, admitted a small but growing number of polytechnic graduates, mainly through the discretionary admission scheme. Polytechnic students don't take General Paper. So the faculty makes them sit an English proficiency test.

The professors say the polytechnic-trained students' "practical bent" of mind is an advantage. They are quick to realise the applied value of what they learn and use it in real-world situations.

Similarly, at the business faculties in the two universities, dons have noted that polytechnic graduates are "hungrier" and more entrepreneurial. They are more likely than their JC peers to launch start-ups.

Top universities around the world have been using broad-based admissions criteria for years to sift out students with the right aptitude.

One counter-argument is that such admissions are less transparent and subjective. Not so.

I recently sat in on the admission interviews for UniSIM law school, which aims to plug the need for family and criminal lawyers. I was surprised at the amount of time the panel of four spent evaluating each applicant and the detailed way in which every applicant was adjudged independently by each person on the panel.

The admissions panel was a high-powered one, with vast experience. Besides the law school's dean, Senior Counsel Leslie Chew, the panellists included another Senior Counsel, Ms Engelin Teh, who is an expert in family law, well-known criminal lawyer Anand Nalachandran and Law Society vice-president Kuah Boon Theng.

The shortlisted applicants had cleared the Law National Aptitude Test, a British admission test to assess the aptitude of candidates in the skills required for law.

So, it is hardly a subjective system and, in my view, more likely to route the right students to the right courses.

Switching to an aptitude-based scheme will also be good for students, including the high scorers, because it will encourage them to identify and build on their unique strengths in school instead of chasing after grades.

Minister Ong made an astute remark during his Parliament speech - that, because we have an effective and internationally well-regarded education system, it gives rise to a temptation to just tinker around at the edges, instead of making more fundamental, but necessary, changes.

Let's be bold and give up the university admission system based on grades alone.

Instead, let talent flow into areas for which it is best suited.