Be open to more diverse views 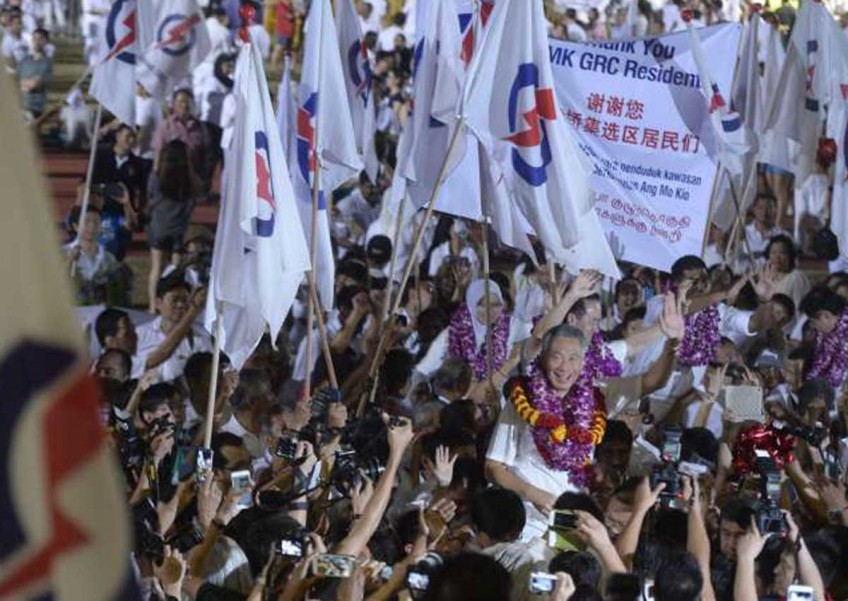 There's no better time than now for the People's Action Party (PAP) to be more politically inclusive, precisely because of the strong mandate it has been given with its 69.9 per cent vote share in the General Election, say party insiders.

"It is always best to change from a position of strength, which the PAP has now," says retired veteran MP Inderjit Singh, who stepped down from politics before this year's polls.

"Not being inclusive can be disastrous as people have given the PAP a second chance now," he adds, referring to the 2011 polls, when its vote share fell amid unhappiness with its policies and the perception that it was out of touch.

"This (opportunity) should not be wasted because trust is difficult to build but easy to lose."

Some observers had feared that the PAP would take its strong victory as a licence to close ranks. But at its press conference after the results, Prime Minister Lee Hsien Loong said it would heed the call for diverse voices to be heard more in Singapore's political system.

So, what would a more inclusive PAP government look like? For one thing, politically minded Singaporeans, civil society activists and even opposition politicians may get more invitations to informal chats with ministers. Defence Minister and PAP organising secretary Ng Eng Hen tells Insight: "We'll call them up for a meal or tea, just to listen to them, talk to them." On his invitation list are Singaporeans he met on the campaign trail who "made a lot of sense", he adds.

Newly elected Nee Soon GRC MP Louis Ng wants to run monthly town hall sessions where residents in his ward of Nee Soon East can raise any topic they want. "My questions in Parliament will be drafted from these sessions, so the residents, essentially, have a say in Parliament," he says.

The PAP is also likely to go out of its way to collect even more feedback on proposed laws before they are tabled - in place of neat proposals on laws by civil servants, after some feedback sessions, that are passed without a hitch.

This means more public forums and dialogue sessions on specific areas of interest are on the cards. "The debate shouldn't just be confined to Parliament. What's more important is the debate that happens outside Parliament," says Mr Ng, a civil society activist.

He recalls a public forum on animal welfare policies he co-organised in 2011, where the public and activists gave recommendations. Their feedback culminated in stronger legislation against animal cruelty passed last year.

Hong Kah North MP Amy Khor, who chairs government feedback unit Reach, says that different feedback platforms can be used, from conventional dialogues and social media sessions to talking to individuals on the ground. She says: "The opposition is welcome to participate in these conversations, including written contribution of their ideas beyond parliamentary debates. We are open to hearing from everyone, as long as they enrich the discussion and address the issues at hand."

Mr Ng says that while the Government has opened the doors for engagement, it is also up to civil society to be more constructive. "If we insist our point is right and theirs is wrong, that makes any dialogue difficult. But if both sides find some common ground, we can work towards a win-win solution," he says.

Going a step further, Mr Singh suggests that ministers bring uncompleted Bills to Parliament to be debated, and more Bills go to select committees, where proposals can be closely scrutinised and finalised.

Currently, parliamentary debates are largely perfunctory, with MPs reading off prepared scripts and Bills passed into law right after the debate, mostly unchanged.

There is a provision for Bills to be sent to select committees - made up of MPs who can solicit public feedback, call witnesses, hold hearings and suggest changes - after their second reading. But the last time it happened was in 2004.

Of his proposal, Mr Singh says that such a policymaking process may take a little longer, but it is necessary for good-quality policies.

"We have a situation where the key decisions are made by just a handful of people who may not consult widely, and the outcome may not be good," he says, citing the Population White Paper in 2013. The paper detailed plans the Government was making to prepare for a population parameter of 6.9 million but this sparked an uproar among citizens about the lack of consultation.

Another way to institutionalise the practice of listening to more voices is to expand government parliamentary committees, which only PAP MPs are members of. Mr Singh suggests making non-PAP MPs and more Singaporeans part of these committees. As the ruling party encounters more diverse voices, it should keep an open mind, say insiders. "More PAP MPs must be able to challenge policies and ministers must be willing to accept these challenges," says Mr Singh.