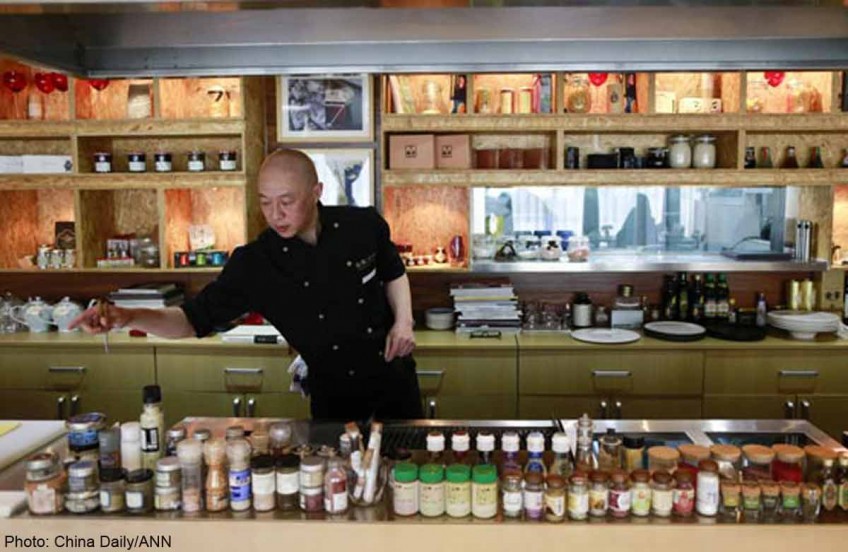 The Beijing native has been cooking in famous Italian restaurants, such as Armani, Pastarito and Nobu, since the late 1990s, before returning to his hometown in 2005. He has catered for foreign embassies in Beijing, and once cooked for a Greek president and also for a mayor of Milan.

Today, after more than two decades in professional kitchens, Guo Qiang cooks for the online universe.

As chief chef and co-founder of Benlai Cookhouse, a restaurant affiliated to China's leading online shopping platform for fresh food and ingredients, Guo says he has an advantage over running a conventional restaurant.

As an offline showcase of Benlai.com, Guo says, "Here my priority is to create delicious food based on the various ingredients I have."

The chef, 44, frequently used the word "works" to describe dishes the restaurant serves. Guo's confidence lies in his proficiency in using different cooking methods to bring out the best flavors of ingredients.

Benlai Cookhouse has access to the freshest meats and products sourced at home and abroad.

The restaurant has access to the freshest meats and products that the website has searched out from around the country and even overseas, as it is designated to offer an "off-line experience" created with ingredients sold on Benlai.com.

He says potatoes are just one example of how he makes the most out of his ingredients. Big or small, stored or fresh, different potatoes should be cooked in different ways to keep and enhance their particular flavors. They can be baked, boiled, fried, mashed, or scalloped-and the possibilities and combinations mean he can create a different array of flavors, even with the same potatoes.

The Ritan-area restaurant opened in late 2013, in about 170 square metres that were carefully designed to his requirements. It looks cosy with homelike furnishings and decoration.

A long open kitchen faces the public area, offering diners a full view of what's going on in the kitchen; they can ask the working chefs any questions they have.

There is also a bar-nine seats - just in front of the kitchen, which are usually occupied by regular customers.

"I hope customers will be able to observe how we cook," Guo says proudly. Cooking is not just processing of ingredients, but also a process of creation-a beautiful art, he adds.

The restaurant doesn't have a menu, and requires making a reservation a day before or at least before noon.When customers call, the receptionist will ask what they eat and what they don't, and then the chefs will design courses tailored to requests. There are about five courses for each diner including dessert.

Bread is a delicious surprise: There are four kinds of major breads in the restaurant. The little cheese bun tastes moderately sweet; ball-shaped spinach bread has a strong and pleasant wheat flavor; hemisphere-shaped bread is made with olives, honey and salt, and has very soft texture; a square-shaped bread is made with onion, potato and olive oil, and is very chewy and tasty.

The appetizer on a recent visit was New Zealand scallop salad, which consisted of semi-crystal shrimps and creamy scallops. They were soft and chewy, and so fresh that I could smell the scent of sea as I ate them.

My favourite dish that day was the little yellow pumpkin soup with vegetable crispy bread. The soup was milky and golden, with a sweet and inviting flavor.

Guo says the soup is made without spices. He chooses a ripe little yellow pumpkin, allowing it to sunbathe for several days to harden it -until he cannot pinch off the skin. He fries the chopped pumpkin with onions, mashes it all with water and milk, then boils the mixture before serving.

The crispbread had different layers: At first bite, the texture was hard and crisp, and then it quickly melted in the mouth. It was also very tasty when soaked in the soup for a bit.

A delicious beefsteak, my main course, did not let me down, either. Guo says it was made from top quality Australian tenderloin, and I enjoyed its moist, soft and chewy texture.

The steak was served with foie gras and two kinds of salt: black volcanic salt and smoked sea salt. The restaurant has collected about 100 kinds of salt, because Guo likes to experiment with flavors.

The dessert, iced caramel cream pie served with blueberries and strawberries looked very beautiful and it tasted dense and sweet, quite to my taste.

First-time visitors should go a little early: it is difficult to find the restaurant among all the eateries dotting the Shenlu dining street without a smartphone map; it is on the third floor of a small building that is easy to miss.

The ingredients differ for differently priced meal sets, which are respectively 280 yuan (S$60), 380 yuan and 480 yuan per head for dinner. For lunch, the price levels are 120 yuan and 150 yuan per head.Contact the writer at liuzhihua@chinadaily.com.cn