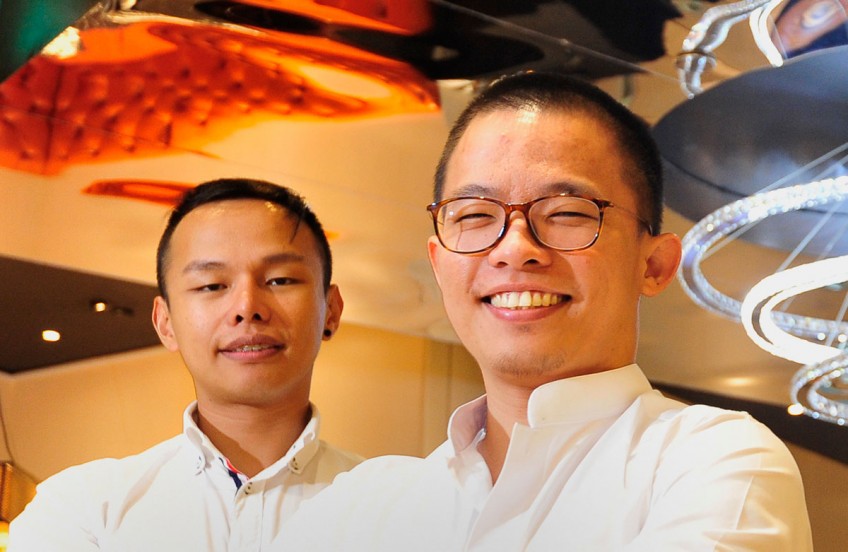 Call them the best flavour enhancers you have never heard of. Yet.

Three years after they opened their first Saveur restaurant (the name is French for "flavour") in Purvis Street, Mr Joshua Khoo and Mr Dylan Ong are making a name for themselves in the competitive food and beverage industry here.

From that first outlet, which still attracts long queues of budget-conscious young people for its affordable French food, the pair have expanded their business with another outlet at Far East Plaza, as well as an Italian restaurant, Concetto by Saveur, at The Cathay.

Both come from humble backgrounds.

Mr Ong's love for cooking came from his mother and late father, who were hawkers selling fish head beehoon in Whampoa.

Some of his best dishes include curry chicken, chilli crab and herbal soup, from his days of watching cooking show Yan Can Cook on television.

As for Mr Khoo, his mother is a hairdresser and his dad drove construction workers from site to site. He grew fond of Chinese cooking and started working in fast-food chain KFC, as well as working as a waiter at a seafood restaurant.

To pursue their interest in cooking, both dropped out of school.

Mr Ong, 28, was studying for a Higher Nitec certification in megatronics at ITE College Central, while Mr Khoo, 31, left Nanyang Polytechnic at the end of the second year of an engineering informatics course.

They became best buddies at hospitality school Shatec, where they picked up the fundamentals of cooking - from butchery to making sauces.

After graduating in 2008, they worked in various restaurants before setting up their $35,000 hawker stall, Saveur, in a Joo Chiat coffee shop four years ago.

Since then, they have opened a new restaurant every year, modelled after the Astons chain which serves affordable Western cuisine.

In 2012, they opened their first Saveur restaurant in Purvis Street, and expanded into the unit next door the same year. The 2,500 sq ft restaurant now seats 90 diners, up from 60 previously.

A year later, they opened a 74-seat Saveur in Far East Plaza, as well as a 1,800 sq ft central kitchen in Bedok North producing their meat items.

Last year saw Italian restaurant Concetto opening in April as well as the arrival of the spiffy 74-seat Saveur Art in October. Calling Ion their "dream location", the pair decided to move in when approached by the mall's management.

Mr Khoo says: "Back when we were hawkers, we used to dream about it. What if we could open in Ion or Marina Bay Sands? We never thought our dream would come true."

In line with Ion's chi-chi vibe, the restaurant started with a fine-dining approach, complete with a range of artisanal cheeses, wines and champagne. Prices at Saveur Art are about 10 to 15 per cent more than their other outlets.

Nine months on, however, they have gone back to their casual dining roots - keeping the prices but serving heartier fare instead of small fine-dining portions. "People should now roll out the door after their meals," says Mr Ong.

Insisting that this is not a setback from their initial plans for a fancy French restaurant, the duo emphasise that the decision was based on customer feedback that portions were too small.

But the owners are not worried, even though Saveur Art does not attract the crowds of their other outlets.

Mr Ong says: "We are listening to our diners and will change accordingly. We still want to provide affordable French food."

Things have slowed down this year as the entrepreneurs take time to "reconfigure and restructure the company", says Mr Ong, who manages Saveur Art and Saveur at Far East Plaza, while Mr Khoo handles Saveur at Purvis and Concetto.

A third business partner is Mr Eric Chiam, a medical doctor, whom they acknowledge as their mentor. He works with the duo on strategic planning for Saveur.

This calculated move is to ensure that Saveur endures as a "long-term brand", adds Mr Ong, who believes they will be ready to expand from next year, and does not rule out overseas ventures.

Abuzz with ideas for new concepts, the chatty chefs are considering everything from a sandwich deli with smoked meats to rolling out local cuisine.

After all, they have stayed close to their hawker roots, determined to keep their food affordable, which has been the key to their success so far: think $5.90 for foie gras and $8.90 for duck confit when they first started as hawkers.

Suppliers they met when they were hawkers have stuck with them. And, they acknowledge, it helps that droves of young adults are now willing to spend on French food.

Mr Ong says: "We watch our costs, and our chefs are educated on how to maximise ingredients. People have come to know our brand, so that creates the volume. Without the volume, we wouldn't be able to do it."

Perhaps it is the nurturing culture in the company too that fuels its success. Three of their staff from their hawker days in Joo Chiat have stuck with them over the years.

They have a 70-strong crew across the four outlets. Opening Concetto, says Mr Ong, was a way for their staff to learn to cook and serve another type of cuisine.

The pair have a quiet confidence and candidly speak of how they still have arguments, but are quick to move on and not bear grudges.

Their worst quarrel so far was in their first month of opening at Purvis, where diners had woken up to a good review of Saveur in The Sunday Times.

A crowd of more than 20 diners was waiting outside the restaurant, something the pair were not ready for. An overwhelmed Mr Khoo had to call Mr Ong into the kitchen, even though it was his day off.

Mr Ong says: "It was 8am on Sunday and my first day of rest after running Purvis for a month. Fatigue had set in, and we were not prepared for the crowd.

"The kitchen was in a mess and we didn't know what to do. Tempers flared and we ended up outside the kitchen in the carpark, getting ready to fight each other."

After cooling down and serving some diners, the kitchen was shut down after an hour as they did not have enough ingredients to feed the hungry diners.

Calling it a "hard time", the duo now laugh off the incident as a learning lesson.

On their "rare" days off, the pair attend church and spend time with their family.

Clearly not sick of seeing each other on a daily basis, Mr Khoo chuckles and says: "We challenge each other to meet every day. After all, we're in the same boat, we handle the same s***."

And as they contemplate the challenges facing the F&B industry, such as manpower shortage and increasing competition, the lads remain focused on the mission they started out with.

Mr Ong says: "Ten years down the road, we still hope to sell our duck confit with truffle mash at $16.90 (current price at Saveur). Throughfood,we want to be a blessing to our diners and staff."

This article was first published on July 6, 2015.
Get a copy of The Straits Times or go to straitstimes.com for more stories.