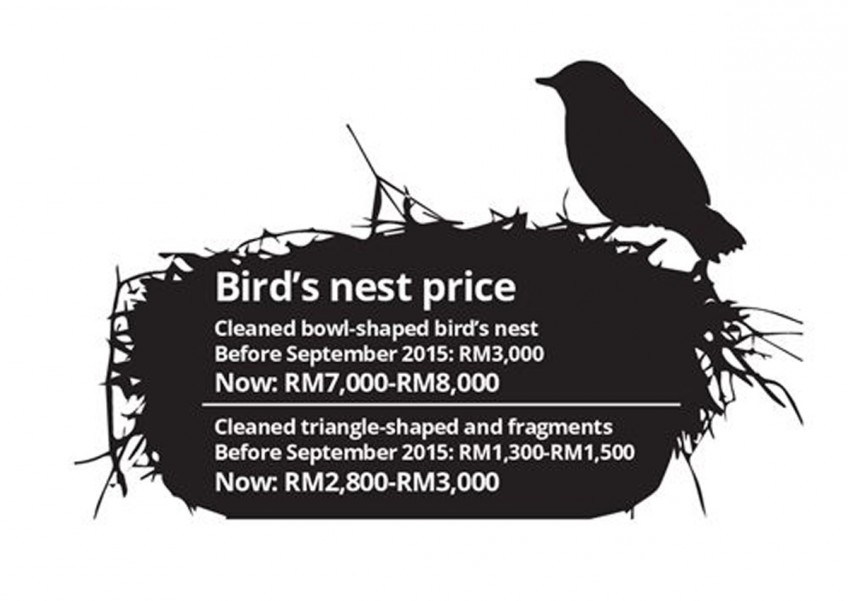 PETALING JAYA - What a reversal of fortunes.

Five years ago, many bird's nest farmers wanted to throw in the towel when the industry hit rock bottom after China banned its import, following claims that some bird's nests here contained an excessive amount of nitrite.

Farmers who persevered are now laughing all the way to the bank because of a windfall since last year, with prices soaring more than two-fold.

The prolonged haze last year crippled Indonesia's production, with industry players estimating a drop of over half the volume in 2014.

The decrease in supply has forced suppliers to source for Malaysian bird's nests, causing them to surpass the pre-2011 price of RM7,000 per kg.

"Then in September came a sudden increase in demand. China began to import our bird's nests at RM7,000 to RM8,000 for every kg," he said.

Experts believe the prices are here to stay as the Indonesian swiftlet population will take several years to recover.

Malaysia Bird's Nest Merchants Association president Lim Theam Siew pointed out that land­-clearing in Sumatra had destroyed many of the swiftlets' food sources, causing them to starve.

"You have to wait for them to reproduce naturally," he explained.

Lim believes that prices could go even higher following the abolition of the one-child policy.

However, he claimed swiftlet farmers were not benefiting fully from the price hike, adding that unprocessed bird's nests were sold at less than RM3,000 per kg.

Lim, a swiftlet farmer himself, said they were forced to accept the prices set by companies which had been approved by the Certification and Accreditation Administration of China (CNCA) as these were the only licensed channels.

Following the discovery of nitrite in Malaysian bird's nests, China imposed a ban on the billion-ringgit industry for more than one year.

When the ban was lifted in 2012, only local processing establishments approved by the CNCA were allowed to export raw processed bird's nests to the country.