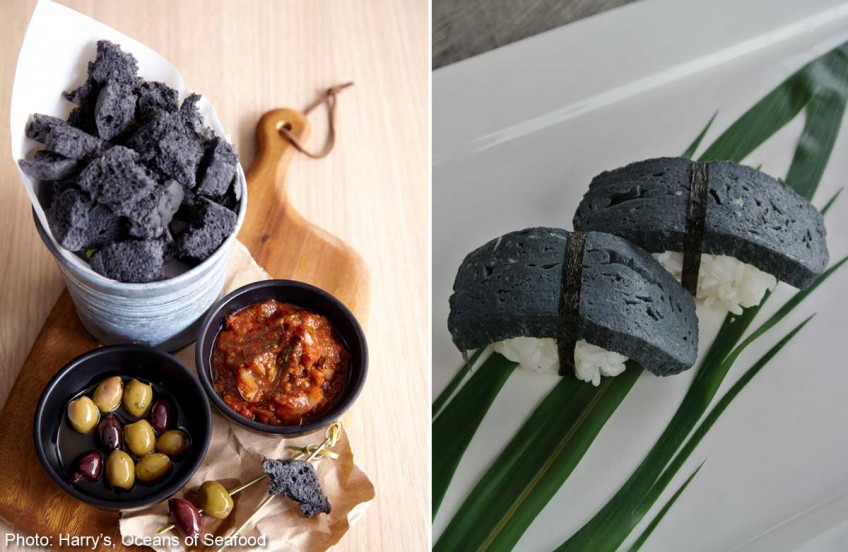 In the palette of the food world, diners are normally attracted to buns baked to a golden brown, cakes studded with colourful berries, meats jazzed up with leafy greens and sauces that add pops of colour to a dish.

But, sometimes, black has its allure.

Chefs and bakers are rolling out black food, ranging from buns to macarons to sushi, with the colour derived mainly from charcoal powder or squid ink. It is the black sheen that chefs have taken a shine to.

Burger King's BK Black burger, a bamboo charcoal bun with turkey bacon and a choice of beef patty or chicken thigh that was introduced last year for a limited period, is back again until early next month, while stocks last.

Most of the time, restaurants offering black food do it because the colour makes the food look dramatic.

Master chef Chan Hwan Kee of Min Jiang at the Goodwood Park Hotel, who created a mini black charcoal egg custard bun for the restaurant's dim sum menu that launched on May 1, says: "We wanted to add a glamorous twist to the humble dim sum item.

It sells about 100 squid ink bread sandwiches every week.

However, looks alone are not the reason.

At Dolcetto deli at the Regent Singapore, squid ink panino and squid ink macarons quickly became signature items when they were introduced in 2012.

Squid ink is also used in other dishes at the hotel's Italian restaurant Basilico.

As for charcoal, its activated forms are commonly used as medication for food poisoning. The ingredient has "little nutritive value", she says and recommends eating both ingredients in small portions and "very occasionally".

While the novelty of black food has attracted the attention of diners, taste still matters most.

Nanyang Technological University undergraduate Gabriel Isaac Goh, 22, has tried Burger King's BK Black burger and says: "It was appealing to me aesthetically, plus it was a convenient option. I noticed an added flavour to the bread, but I'm not sure if it is due to the nature of the charcoal bread or artificial flavouring. It's more of a novelty item for me."

National University of Singapore undergraduate Ong Lin Hui, 21, who has tried Fatcat Ice Cream Bar's charcoal waffles, says: "I thought it was different from other waffles, but the colour didn't affect the taste. There are probably better waffles out there.

"It's interesting to colour the food black and, with Instagram, the food can look appealing."

What: Popular items on Dolcetto deli's menu include the squid ink panino ($14+), as well as a savoury squid ink macaron ($2.25+, left) with a smoked salmon filling.

What: The fast-food chain's BK Black (above) returns after a successful debut last year. The burger features a bamboo charcoal bun with toasted white sesame seeds, turkey bacon and a choice of either Whopper beef patty or spicy Tendercrisp chicken thigh.

The BK Black Value Meal ($8.35) comes with medium fries and a small Coke or Sprite. Available till early next month, while stocks last.

What: Besides tucking into juicy roast duck at the four-day-old London Fat Duck, leave some space for its signature black pepper London duck bun ($4.80 for three).

What: This bakery chain has a range of black chocolate buns.

Items include Chocolate Cheese ($7.40) with coffee and cocoa powder; and Guste ($4) with chocolate chips.

What: Introduced two weeks ago to the menu at Harry's is baked charcoal and onion ciabatta ($14) with Imam Bayildi, a Middle-Eastern dish of eggplant with tomatoes, raisins and onions.

What: Charcoal waffles ($6, above) drizzled with the other "It" ingredient, a sauce made with salted egg yolk.

What: Not the usual squid ink pasta or risotto, Capri serves a ravioli al nero di seppia ($25++, above) which is house-made squid ink ravioli filled with seafood and cheese.

It comes with a squid ink seafood sauce as well as clams, squid, mussels and prawns.

What: For an eye-catching twist to the usual salted egg yolk custard bun, the restaurant's chef Chan Hwan Kee created the mini black charcoal egg custard bun (above). The buns are available on Min Jiang's a la carte dim sum lunch menu ($4.20++ for three), and on the Local High Tea Buffet (rotating menu) at Coffee Lounge ($39++ an adult, $19.50++ a child).

What: Black sesame is used in many forms, so how about having it in Japanese omelette? Launched today, the kuro goma tamago sushi ($2.50 a piece, right) uses black sesame paste from Japan.

What: Tippling Club's signature amuse bouche for its dinner menu is charred peppers (above) served with a soya and wasabi dip, and eaten with a pair of tweezers. It is also available on the bar snacks menu for $17++.

What: The latest item on the Taiwan snack chain's menu is squid ink seafood tempura (from $3.90). Give the tempura, which is sprinkled with parsley, a good shake in the matte black papper bags. Shout the official hashtag "HeiHeiHey" upon ordering to get a 30-cent discount.

This article was first published on May 24, 2015.
Get a copy of The Straits Times or go to straitstimes.com for more stories.