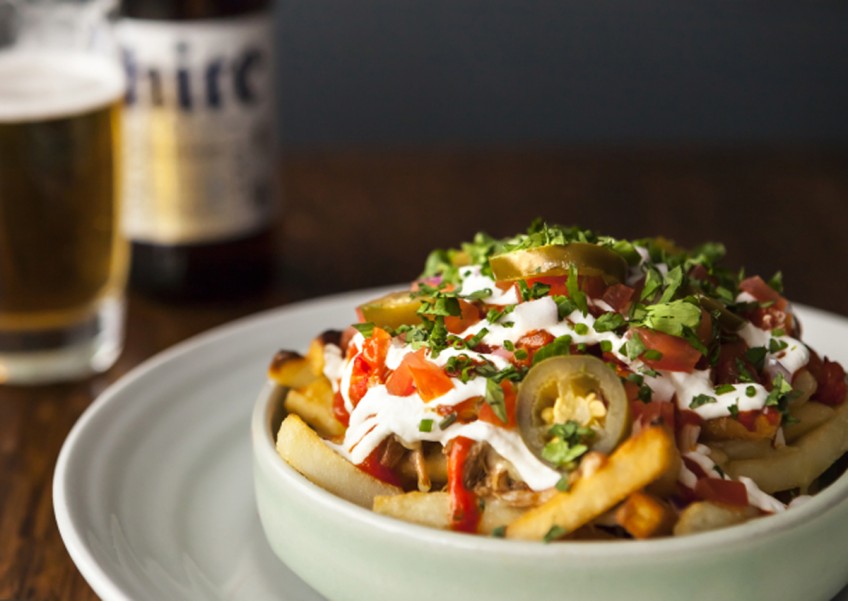 It is hard to say when it all began, but kimchi is no longer solely served alongside or as part of traditional Korean fare.

Now, one can find it garnishing non-Korean eats like fries, burgers and paella at Judy Joo's London-based Jinjuu, Russell Moore's Camino in California and even on Korean turf in Coreanos Kitchen.

"I agree that kimchi is being used in non-Korean dishes -- like kimchi tacos and kimchi ravioli," said Matt Rodbard, author of "Koreatown: A Cookbook" and Saveur columnist.

"I definitely see kimchi popping up on menus in California," Camino co-owner and executive chef Russell Moore agreed. "It's another ingredient that chefs are using to flavor or accompany dishes."

The Culinary Institute of America's director of digital media John Barkley credits chef David Chang -- who opened Momofuku in 2004, Ssam Bar in 2006 and Ko in 2008 and made headlines with dishes like Ssam Bar's and Ko's kimchi consomme -- with playing an influential role.

"David Chang was one of the early chefs to bring awareness to modern menu applications for kimchi and we are now seeing American-inspired variations of kimchi," Barkley, who coproduced "Savoring the Best of World Flavors: Korea," said via email.

Fast forward to 2015. Now one will find chefs seamlessly melding the traditional Korean fermented vegetable dish into their fare.

At Camino in California, for example, Chez Panisse alum Moore incorporates it into his paella.

"The method we use to make the paella is very Spanish, but we use kimchi instead of tomato and saffron to complement the rice," Moore explained via email.

At restaurants Joule, Revel and Trove in Seattle, owner-chef Rachel Yang and team serve it up in eats like "kimchi and chorizo stew, served with sauteed brussels sprouts and apple with grilled bread and poached egg."

"It truly makes for a perfect breakfast dish," Yang wrote an in email.

"I would say the most interesting ways we are using kimchi are in our sauces," Joo added, explaining how she and her team craft a "kimchi Caesar salad dressing" and "kimchi Bearnaise sauce." Even in Korea, one can find burritos filled with kimchi fried rice and fries topped with caramelized kimchi at Coreanos Kitchen, a three-outlet Mexican fusion restaurant.

For the fries, Cho explained, he and his team make "caramelized kimchi" by cooking "our kimchi over high heat with butter until it browns, creating a sort of nutty, more umami flavor."

Both the kimchi fried rice-filled burrito and caramelized kimchi fries "are two of our bestsellers," said Coreanos Kitchen chef Cho, who cofounded the high-profile Mexican-Korean fusion food truck Coreanos in Texas before moving on to a second act on his own with Coreanos Kitchen in Seoul.

Kimchi is not only being used as an ingredient in non-Korean eats. Chefs are also tweaking the traditional format of kimchi, substituting classic ingredients like cabbage, cucumbers and daikon radish for unconventional ones like bok choy and kale. Joule's Yang and team, for example, not only create traditional kimchi for their restaurants but also make kimchi "with an interesting twist."

"At Revel, we have an albacore tuna rice bowl served with charred escarole and fennel kimchi," Yang explained how fennel kimchi is made by shaving pickled fennel and mixing it with kimchi spices. "It goes perfectly with the tuna."

Rodbard, who coauthored "Koreatown: A Cookbook" with chef Deuki Hong, said sees kimchi more as a verb than a noun, a process that can be applied to various ingredients.

"You can kimchi kirby cucumbers, daikon radish, chives, onions, eggs and pineapple (we have a recipe for that in the book)," he said.

"There are so many ways to prepare and create different types of kimchi using a variety of fruits and vegetables," Coreanos Kitchen's Cho agreed. "When I went back to the States last winter, I remember seeing apple kimchi, kimchi slaw and kimchi chutney."

The increasing prevalence and popularity of nontraditional uses of kimchi might alarm purists, but taken from a different angle, it might signify that kimchi is simply staking a broader and more permanent place in the foodie stratosphere, where consumers can enjoy it in various dishes and formats that are both traditional and unconventional.

According to Rodbard, awareness of kimchi is widespread, indeed.

"Kimchi is known around the world, specifically the cabbage kind," Rodbard said.

"Customers in NYC are very familiar with good-quality fresh kimchi that uses seasonal ingredients as well as cooked and sauteed aged kimchi that is such a good complement to grilled fatty pork belly and beef short ribs," Kim wrote in an email interview.

Does an increased awareness of kimchi and its diversified use by chefs in both traditional and unconventional formats signal that its popularity will not wane?

"Kimchi is a hit ingredient. It isn't a trend -- it's here to stay," said Jinjuu's Joo.

"Delicious food is never a trend as truffles and caviar have been around for centuries," said Danji's Kim. "I believe kimchi will take the same route in popularity as it is not only delicious but healthy for the body as well."