Bone appetit: The benefits of broth 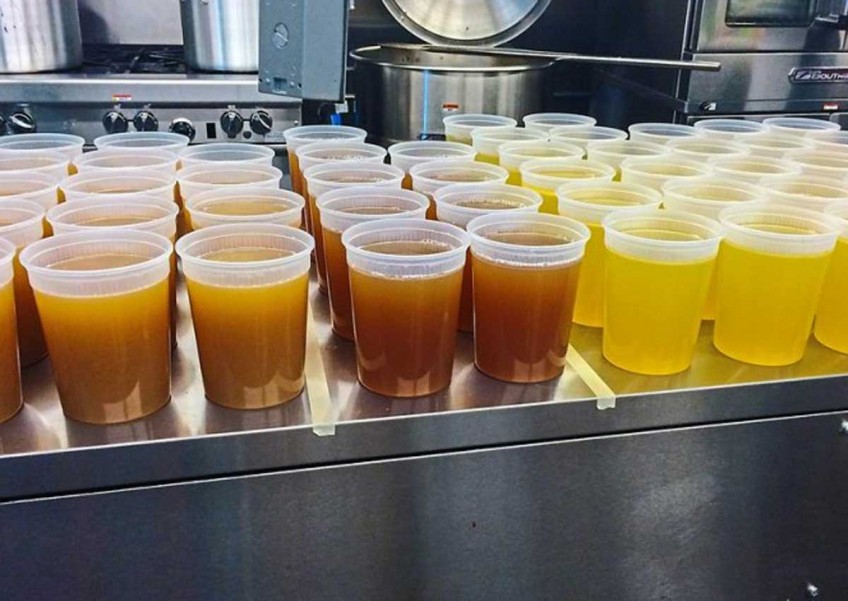 Bone broth is so old, even people during the Stone Age were sipping it. There are stories of our prehistoric forebears using the stomach pouches of slaughtered animals as vessels for bones, meat, herbs and animal fat, which were then left to simmer over hot stones.

In cultures across the world, bone broth has continued to be a staple - from brodo (Italian for broth) to Vietnamese pho, Japanese tonkotsu, Malaysian bah kut teh and sup tulang.

By the 1960s, MSG had replaced broth as an essential component in the food industry as well as restaurant kitchens. Soon, even home cooks adopted it.

And then, a couple of years ago, everything changed when traditional bone broth found itself back in favour.

In 2010, chef Marco Canora was overweight, had high cholesterol levels and was generally unhealthy. Looking to turn his life around, he started sipping the Tuscan bone broths - brodo - his Italian mother used to make, and noticed a vast improvement.

In 2014, Canora opened his takeout restaurant Brodo, specialising in bone broth. It was an instant hit, with queues a commonplace occurrence. Canora now sells 150 to 190 litres of hot broth daily, plus an additional 50 to 75 litres in jars of frozen broth.

While many of the fans who queue up outside Brodo every day are regular New Yorkers looking for the latest in healthy living and eating, lots of celebrities have gotten in on the action too.

Celebrity bone broth fans include Salma Hayek, Gwyneth Paltrow, Kobe Bryant - who has attributed his accelerated healing after injuries to bone broth - and health freak Shailene Woodley, who has bone broth for breakfast!

Now that bone broth is hot again, it has gained a reputation for being a liquid superfood that clears complexions, boosts hair growth and heals joint injuries.

So just what is in good old animal bones, and why can't you just gnaw at the bones and get the same magical benefits?

Well, for one thing, according to the Harveys, "All of these nutrients are locked in the bones, tendons and cartilage of animals until the slow-cooking process liberates them."

This basically means you have to simmer the bones and meat to get the nutritional value.

According to Robin Westen, author of Heal Your Gut with Bone Broth, animal bones are made up of about 50 per cent protein and contain a host of beneficial properties, including collagen, gelatine, cartilage, amino acids, calcium, glycosaminoglycans, glucosamine, magnesium and phosphorus.

A large percentage of bone broth's appeal lies in its high collagen content, derived from animal parts like chicken feet, beef knuckles and marrow and fish head. Collagen is a protein that helps keep the body supple and elastic, i.e, young. Pricey collagen supplements and beauty treatments are aplenty - the industry is so profitable, it is expected to be worth US$4.4bil (S$6bil) by 2020.

Because collagen production declines as you age, the collagen in bone broth has been heralded as the best way forward for people wanting a daily dose of affordable collagen (liquid is also supposed to be better than pills for absorption), to give them radiant skin, thicker hair and strong nails.

According to Canora in his cookbook Brodo: A Bone Broth Cookbook, the bones from young animals have the highest collagen content. Canora says he has benefited from bone broth's aesthetic virtues as his wife says the fine lines on his forehead have virtually disappeared!

Once collagen is cooked down in the broth-making process, it transforms into gelatine, a jelly-like substance. Gelatine is chock-full of amino acids like proline, glycine, glutamine and arginine. Canora says "these are the building blocks your body needs for healthy skin, bones and joints."

In fact, a 2010 study conducted at the University of Mosul College of Medicine found that bone broth significantly improved the speed and quality of healing bones.

There is some proof to back this up, especially if you look at how strongly the sporting community has adopted bone broth.

The LA Lakers team consume it as part of their natural diet now and football announcer Phil Simms called it the new beverage of the NFL!

In her foreword to The Bare Bones Broth Cookbook, Cate Shanaghan, a doctor who works with the LA Lakers, recounted how basketball player Metta World Peace injured his knee and was meant to have surgery.

But after consuming a diet that included bone broth, he was back in action after 12 days, although the usual recovery time is six weeks!

According to Canora, the arginine and glycine in the broth also impart it with protein-sparing capabilities, which means meat consumption can be cut down, because you are getting protein through broth.

One of the most important attributes of guzzling bone broth is the effect it apparently has on the gut. Interestingly, about 70 per cent to 80 per cent of the immune system is located in the gut but many people suffer from poor gut health, linked to unhealthy diets filled with processed, sweetened food.

All of this can lead to a leaky gut, which means holes form in the gastrointestinal tract, allowing food and bacteria to leak into the bloodstream.

This can cause a range of ailments from food allergies to fatigue. Canora says the gelatin in bone broth acts as a sealant and "effectively plugs the holes in the lining of the digestive tract like spackle on a pitted wall and prevents further damage".

Animal bones like chicken feet and beef knuckles are also rich in cartilage, which once simmered down in broth, contains glycosaminoglycans, which helps connective tissue growth and makes joints stronger.

For a proper initiation to bone broth, its proponents advocate going on a bone broth reset, akin to a detox as a precursor to a diet where bone broth is a constant.

Because bone broth has zero sugar and a lot of protein, it is a lot more filling than going on a juice cleansing regime, and Canora says it will give your digestive system a break, support the immune system and keep energy levels up.

Westen, on the other hand, advocates a seven-day detox programme, which also includes a one-week preparatory period where processed food, caffeine, alcohol, stress and a whole lot of harmful elements are to be avoided, to maximise the benefits of bone broth later on.

According to Canora, bone broth has to be consumed as part of a healthy diet, because if you're sipping it every day while regularly eating processed or sugary food, you won't fully reap its benefits.

Including bone broth in your diet doesn't necessarily have to be limited to drinking it straight or in soups.

In the books you will find plenty of recipes where bone broth is incorporated into a dish, like Canora's lamb brodo risotto with peas and mint, which calls for shortgrain rice to be cooked with six cups of roasted lamb broth.

The Harveys have a barbecue chicken recipe, which uses a cup of chicken broth. There are even recipes for smoothies which utilise bone broth! In this way, bone broth can be incorporated into other dishes, bringing more variety to the table.

Ultimately, it would seem that regularly sipping bone broth can do all sorts of wonders for the body.

In fact, the Harveys say they have heard stories from customers whose acne and eczema have healed, as well as those whose autoimmune conditions and digestive issues were eradicated after consuming daily shots of bone broth.

But - and it's important to note - very little of bone broth's supposed health benefits have been verified by science.

Although this doesn't mean it isn't good for you, there's nothing to indicate that it's the miracle cure-all it's been hailed as.

In an interview with Time magazine, Dr Kantha Shelke, a food scientist said, "Anecdotes along the lines of 'I ate bone broth and my gut problem cleared up' do not count as evidence-based medicine."

Well, decide if you want to reap the benefits of bone broth now or wait until your doctor tells you so.