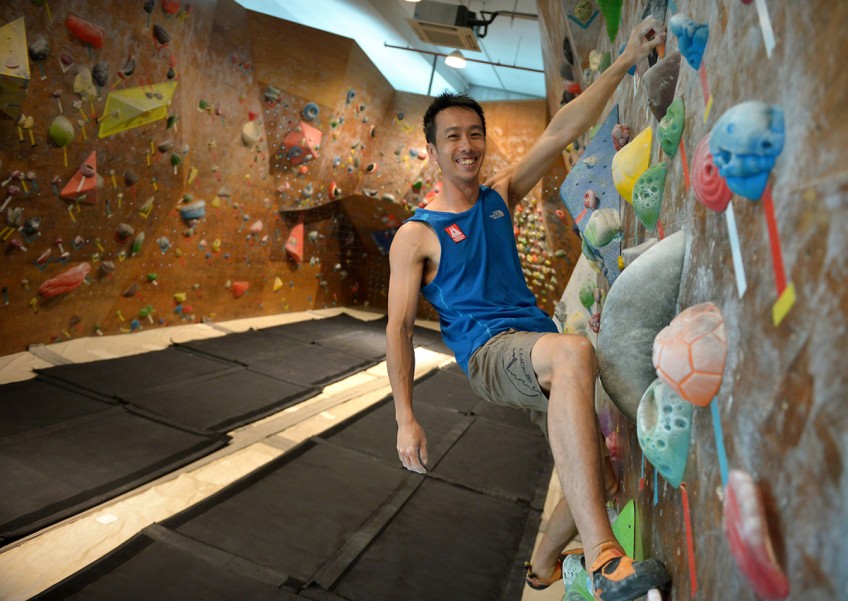 Sport climber Jay Koh represented Singapore at the 2011 SEA Games, winning a silver medal in the bouldering event. He has also competed four times at the International Federation of Sport Climbing World Cup.
The Straits Times

When Jay Koh first tried sport climbing as a teenager in junior college, it was nothing more than a co-curricular activity in the outdoor activities club.

In the years since, he has donned national colours for Singapore at the 2011 SEA Games, where he won a silver in the bouldering event. He had also competed against the world's best in four editions of the International Federation of Sport Climbing World Cup.

And while age has meant the 35-year-old, who owns a sport climbing gym, does not compete as often as before, he could very well find himself on the grandest of stages in a few years' time - the Olympics.

Sport climbing is on a list of select sports proposed for inclusion at the 2020 Tokyo Olympics, alongside baseball, softball, karate, surfing and skateboarding.

The list will be put to a final vote next year before the 2016 Olympics kick off in Rio de Janeiro.

The sport has been on this path before - it was on a similar shortlist of sports in the running for 2020 at the International Olympic Committee (IOC) Session in 2013, but failed to get the nod, with karate, roller sports, wakeboarding and wushu.

Since then, the IOC's Agenda 2020 has allowed a more flexible Olympic programme as the IOC leadership hopes to create a programme that caters more to the young and their taste for adventure and novel sports.

With the sport's popularity in Japan in particular - the country won three medals at this year's International Federation of Sport Climbing Bouldering World Cup - it stands a good chance of featuring in Tokyo.

Local officials are sure of the sport's inclusion in 2020.

Said Rasip Isnin, honorary secretary of the Singapore Mountaineering Federation: "The youth component is very important. We have been quite involved in the campaign to get sport climbing into the Olympics and we are very confident."

The sport is practised in more than 140 countries, with six million registered participants.

Another 25 million unregistered participants are estimated.

It has also grown exponentially in the last few years in Singapore.

Rasip estimates about 50,000 people climb recreationally here, with about 500 who compete on a more serious basis.

The number of commercial climbing facilities has also grown from three in 2011 to six today.

The National Climbing Championships was also revived last month after an absence of eight years, garnering close to 500 participants.

But while Singapore is able to contend for medals in the region, there is still some way to go before that translates to the world stage.

Said Koh: "It's still very much a leisure thing in Singapore now. We have some really talented climbers coming up in the speed discipline, and we're not too bad in lead and bouldering too. It would be a very good achievement if we could be among the top eight in Asia."

He names Japan, Korea, Iran and Indonesia as the biggest players in Asia, with Europeans leading the way globally.

Added Rasip: "Our forte would be in speed climbing. The best speed climbers are from Asia. If we were to focus on that, our chances (would improve)."

"A dream of doing well at the Olympics is not unrealistic. Once we start sending people for World Cup circuits, I think our standards will improve."

There are three disciplines in sport climbing - speed, bouldering and lead.

Bouldering does not involve ropes and requires a competitor to complete a wall in as few attempts as possible.

Ropes are used in lead climbing and the climber who covers the most ground within a stipulated time wins.

In speed climbing, athletes aim to take the shortest time to reach the top of a 15m wall.

For Singapore's younger climbers, the Olympics would be a dream come true.

Said Marcus Yeo, a 23-year-old Singapore Management University undergraduate: "It would mean that sport climbing gets more funding, providing me with a very good chance to compete and be sent for more competitions."

Vanessa Teng, a 19-year-old Singapore Polytechnic student, said: "I was devastated two years ago when it did not become an Olympic sport because we had a really high chance and missed out by just a bit. Today, we have our hopes up and we are hoping for the best."