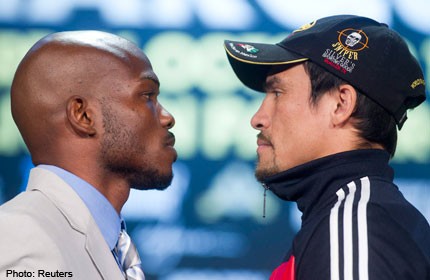 LOS ANGELES - Timothy Bradley and Juan Manuel Marquez, who handed Manny Pacquiao back-to-back defeats in his last two bouts, turn their attention from the Filipino fight king to each other in Las Vegas on Saturday.

Both Bradley and Marquez beat Pacquiao in 2012, Bradley nabbing a controversial split decision in June that seemed to cry out for a rematch.

In December, however, Pacquiao chose to take on a familiar foe in Mexico's Marquez, who seemed to be struggling in the sixth round when he caught Pacquiao with a massive right that knocked the Asian star cold - the clearest-cut result in their four-fight rivalry that had previously produced two narrow Pacquiao victories and one draw.

Now, with Pacquiao set to fight American Brandon Rios in Macau on November 24, Bradley and Marquez will meet at the Thomas and Mack Center for the World Boxing Organisation welterweight title that Bradley took from the Filipino.

Having finally felled Pacquiao, Marquez is now chasing history. The 40-year-old can become the first Mexican-born fighter to win a title in five different weight classes if he beats Bradley.

Marquez insisted this week that his age isn't a factor in the ring. "Everyone asks me, 'How do you feel at 40 years old,'" said Marquez, who brings a record of 55-6 with one drawn and 40 knockouts to the bout.

"I feel very happy and I feel great, like a young fighter with a warrior heart."

Bradley, who followed up his dubious win over Pacquiao with a 12-round unanimous - albeit narrow - decision over Ruslan Provodnikov in March, boasts a record of 30-0 with 12 knockouts.

He absorbed a stream of punishment from Provodnikov in the early rounds, suffering a concussion in the first round and absorbing a blow that nearly gave the Russian challenger a late knockout.

However, Bradley says he's fit and ready to unveil his "Ninja Turtle shell" physique at the weigh-in prior to what he expects to be another bruising encounter.

"It's very seldom that you have two guys willing to fight one another that are quite evenly matched," Bradley said. "It's going to be an interesting night Saturday night."