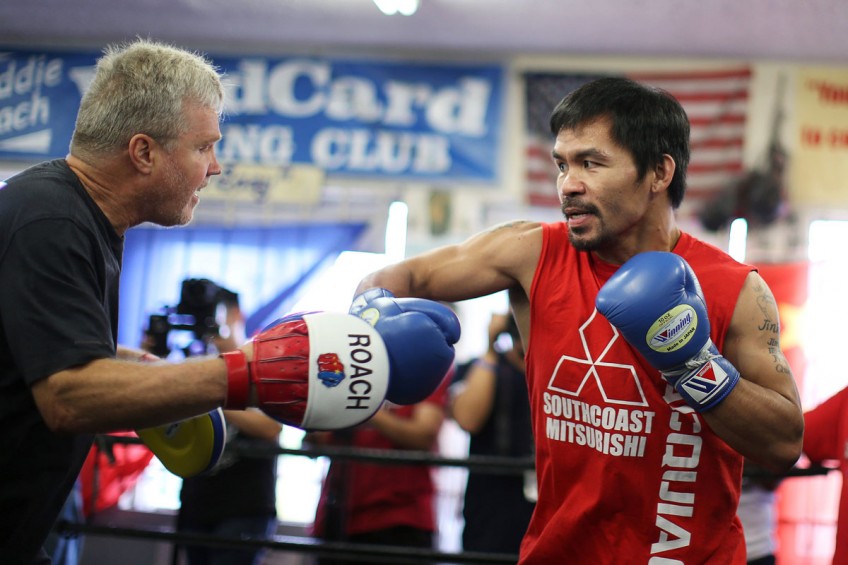 Boxer Manny Pacquiao of the Philippines speaks during a news conference at The Wynn Las Vegas on November 2, 2016.
AFP

LOS ANGELES - Manny Pacquiao's seven-month hiatus can hardly be considered a retirement but there is no doubt that the eight division boxing champ used the time off to reflect on his passion for the sport.

"I thought I wouldn't see you again, but now I'm here to continue my journey," said the newly elected Philippines senator who is in the final days of preparations for Saturday's title fight against Jessie Vargas in Las Vegas.

"I respect Vargas and his team, how dedicated they are. I feel what he's feeling right now because I've been there when I was 27 years old, 28 years old and I know how hungry I was."

Pacquiao is an eight division world champion, something he takes great pride in. It is a record that trainer Freddie Roach thinks will not be broken in his lifetime.

"Winning world titles in eight divisions is not that easy," Pacquiao said. "I am so blessed to be a part of boxing history by winning them.

"That is not me boasting. I am just happy to be a part of the history." Pacquiao looked impressive in April when he dominated Timothy Bradley in their third fight - one he said would be his last.

Now if he gets past World Boxing Organisation welterweight champ Vargas, as many think he will, Pacquiao could be looking at a fight against unbeaten Terence Crawford in 2017.

The way Pacquiao's been able to juggle 14 hour days in the Philippines backs up the notion he could continue to fight for some time at a high level.

In a typical day of wearing two hats, he says he wakes up for a 7 a.m. run. He has to be at the Senate at 10 a.m. for meetings and then the afternoon sessions run until 5 p.m. He goes to the gym in the evening where he works out until 9 p.m. before heading home.

"It's not easy being a senator working in the office and being a boxer while you're training. It's hard, but it's a good thing when you are happy and enjoying it," said Pacquiao.

No fighter can go on forever but Pacquiao is still one of the most recognizable names in boxing and is training with renewed energy says Roach.

"What I'm thinking when I prepared for this fight was I have to make sure I'm in condition and work hard even though I'm working in the office," Pacquiao said.

The 27-year-old Vargas is 10 years younger than Pacquiao and will have a five inch height and four-inch reach advantage when they step into the ring at the Thomas & Mack Center arena.

"I had a great training camp. This has been my best to date," said Vargas. "I'm very happy with my team, they're bringing out the best in me.

"We're looking stronger, faster, we've over-exceeded every aspect in training when it comes to speed, power, intelligence in the ring, ring savvy." Vargas is hoping to catch Pacquiao with his guard down, much like Juan Manuel Marquez did in his 2012 knockout of Pacman to win their fourth fight.