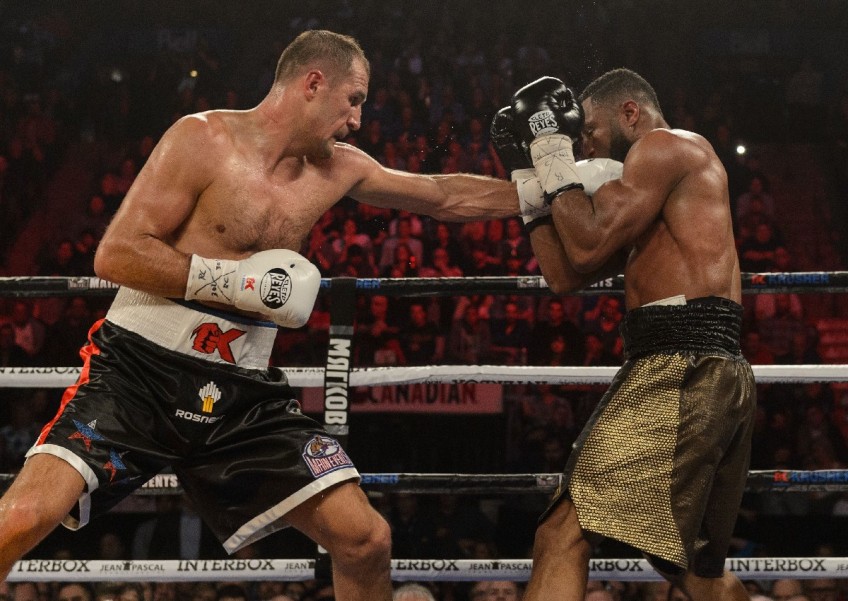 Sergey Kovalev of Russia lands a punch on Jean Pascal of Canada during the WBO, WBA, and IBF light heavyweight world championship match at the Bell Centre on January 30, 2016 in Montreal, Quebec, Canada.
AFP

The 32-year-old Russian dominated every round, masterfully cutting off the ring and landing left jabs at will before Pascal's trainer Freddie Roach put a stop to the slaughter before the start of round eight - giving Kovalev a seventh-round technical knockout.

This was the Canadian's first fight with six-time trainer of the year Roach, but the outcome was virtually the same as his March fight against Kovalev, which ended with an eight-round TKO for the Russian.

Kovalev retained his World Boxing Association, International Boxing Federation and World Boxing Organization titles as he improved to 29-0-1 with 26 knockouts.

The two became bitter rivals in the build up to the rematch with Pascal, who is black, accusing the Russian of being racist and Kovalev questioning Pascal's character.

Kovalev told the crowd of 9,866 at the Bell Centre arena, immediately following the fight, that he purposely extended it to make Pascal suffer more.

"He doesn't respect anybody," Kovalev said. "I don't respect him and I never will.

"I wanted to fight more rounds and punish him more. Give him more pain." Kovalev knocked Pascal down in the first round with a straight left jab but the referee ruled it a slip. Knockdown or not it was a sign of things to come.

By the third round Kovalev was landing rights and lefts at will against Pascal, whose only hope was to go for a roundhouse knockout punch.

Pascal's legs were already going and he looked wobbly as he tried in vain to get away from Kovalev's stinging combinations.

Roach warned Pascal, 33, at the end of the fifth and sixth rounds that he was going to step in and stop the fight but Pascal talked him out of it.

Roach even asked the referee to watch his fighter closely before the start of the seventh round because he was worried about his fighter's health.

"It just wasn't your night," Roach finally told Pascal as the fighter sat on his stool with a vacant look in his eyes.

Pascal, who struggled to win a 10-round decision over Yunieski Gonzalez in his last fight, came in as the heavy underdog. He dropped to 30-4-1 with 17 knockouts.

Kovalev notched his eighth title defense since winning his first belt with a fourth-round knockout of Nathan Cleverly in 2013.

He even said so in the ring Saturday night using a schoolyard taunt to describe Stevenson. "I would like to fight Adonis Chickenson." Stevenson, who watch the fight from ringside, had already climbed through the ropes and was jawing at Kovalev but keeping his distance. Kovalev then gave Stevenson the middle finger before being pushed away by several of his handlers.