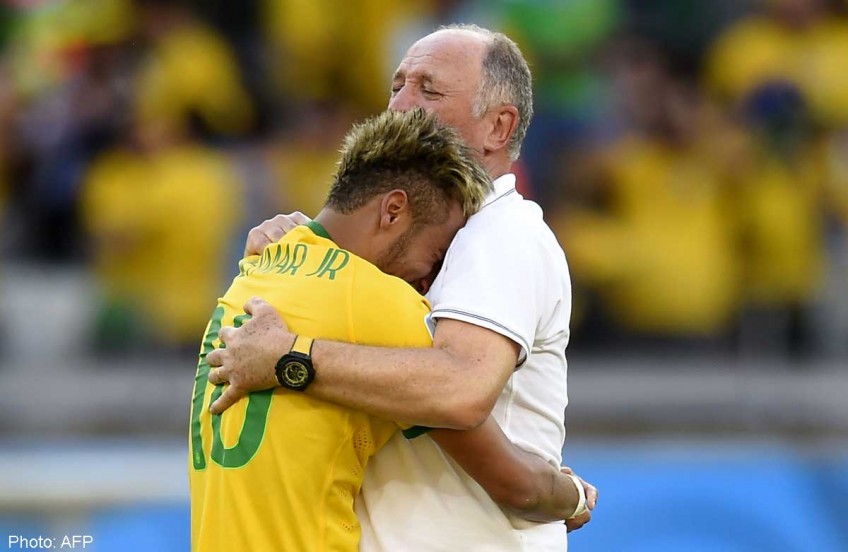 Brazil's coach Luiz Felipe Scolari (R) celebrates with Brazil's forward Neymar at the end of the Round of 16 football match between Brazil and Chile at The Mineirao Stadium in Belo Horizonte during the 2014 FIFA World Cup on June 28, 2014.

Brazil's 7-1 defeat by Germany was the heaviest suffered by a team in a World Cup semi-final.

It also equalled their worst defeat, a 6-0 loss to Uruguay in the Copa America.

The last team to score six or more goals in a World Cup semi-final were West Germany when they beat Austria 6-1 in 1954. Argentina and Uruguay both won 6-1 in the 1930 semi-finals.

Brazil coach Luiz Felipe Scolari had previously led the team to their fifth world title at the 2002 World Cup in Japan. One month after the Germany debacle, he rejoined his old club side Gremio, saying that he "needed a hug".

Brazil joined Zaire and Haiti as the only team to go into the halftime break losing by five or more goals in a World Cup finals match.

Brazil previously hosted the World Cup in 1950 when they were also expected to win the trophy and instead suffered a shock defeat which left the whole country shattered and the members of the team to be vilified. On that occasion, they lost the tournament's decisive match 2-1 to Uruguay when nobody believed they could possibly be beaten.

It became know as the "Maracanzo".

In the 1982 World Cup, Brazil were also hot favourites to win the title with a side boasting players such as Socrates, Zico, Junior, Falcao and Toninho Cerezo.

Their dream was shattered in a 3-2 defeat to a previously discredited Italy, however the team are fondly remembered by Brazilians thanks to their flowing football and flamboyant style of play.

In complete contrast, the 1990 and 2010 teams committed the cardinal sin of playing unattractive football while failing to win, and are among the least popular Brazilian sides to have played at a World Cup.

Before the Germany match, Brazil had not lost a competitive international at home since Peru beat them in the Copa America in 1975.

Four days after losing to Germany, they were also hammered 3-0 by the Netherlands in the third-place match.