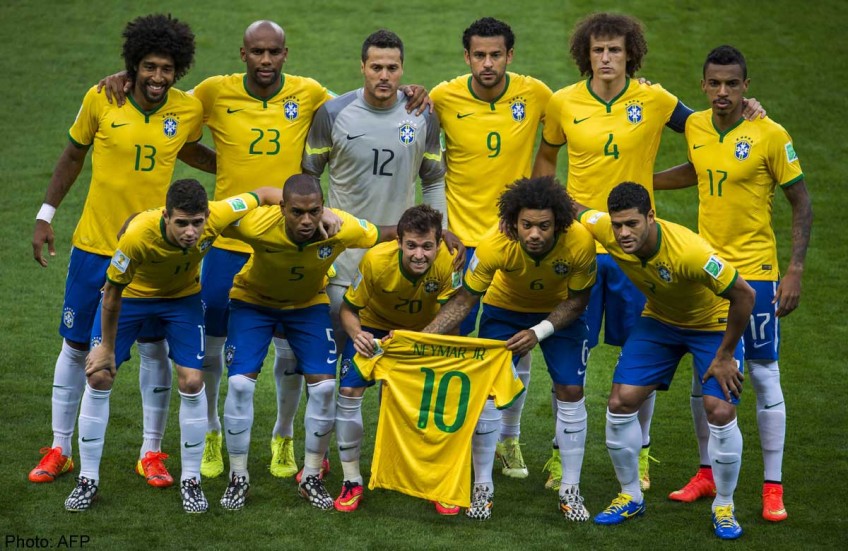 Brazil is a country in mourning.

The hosts of the 2014 World Cup may have staged a tournament that will be remembered for all the right reasons, but the national side were dragged through the mud and booted into ignominy by a ruthless Germany in the semi-finals, with Joachim Loew's men going on to lift the trophy after a 1-0 win over Argentina in the final.

After the harrowing 7-1 defeat by the Germans, the Brazil Football Confederation (CBF) parted company with Luiz Felipe Scolari and are poised to name Dunga as the new national coach.

Dunga, the captain who lifted the World Cup in 1994, will be charged to take the Selecao on a journey of redemption. And the first steps of that journey will likely see Brazil come to Singapore.

Media reports in Brazil have revealed they will play two games in Asia this October.

The first is a mouth-watering friendly against deadly rivals Argentina in China, while the second will see the record five-time world champions line up at the Singapore Sports Hub's 55,000-seater National Stadium, with Japan their likely opponents.

Speaking to The New Paper yesterday, Brazilian ambassador to Singapore, Luis Fernando de Andrade Serra, is pleased that Singapore is poised to welcome his team.

"It's wonderful news, and I see that it is much more concrete now. The match is an opportunity for a fresh start and I'm glad that this will happen in Singapore," he said.

The memory of the crushing defeat by Germany, the worst in the history of Brazilian football, still stings, and the ambassador is looking forward to a new era.

"I couldn't believe what I was watching. I have never seen such a defeat in my whole life, it was very hard," he said.

"I hope this is the beginning of a big 'renovation' in our football, not just of names, but also one of mind-set."

Asia's No. 1 ranked side Japan also endured a poor World Cup, managing a solitary point in three outings in a tournament that ended at the group stage.

The Blue Samurai are also looking for redemption, with various Japanese sources telling TNP that their national team will be the ones to face Brazil in October.

Serra is looking forward to a match that he believes will improve bilateral relations between Singapore and Brazil.

"It is very positive for Brazil-Singapore relations.

"Football is one big factor that makes people like Brazil, and it is a tool for diplomatic relations, of course, and I'm glad that the team are coming here," he said.

"I will be at the disposal of the CBF, and I can work as a link between the Football Association of Singapore (FAS) and the CBF, and I will do my best to make that happen.

"It is important to take advantage of this match to help show that Brazilian football is alive and kicking."

The first football match at the National Stadium will see Italian giants Juventus face a Singapore Selection side on Aug 16.

Singapore coach Bernd Stange has been tasked to handle the Singapore side, and he has promised to put together the best team available.

The Serie A champions have said their best team, with stars like Andrea Pirlo, Gianluigi Buffon, Paul Pogba and Carlos Tevez, will be here.