Breast is best when it comes to newborns 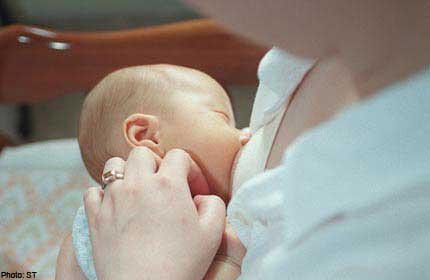 SINGAPORE - It's not unusual for newborn babies to wail.

But if the crying is continuous, one of the reasons could be because the new mother is not producing enough milk to soothe the child's hunger pangs.

"I had a hard time breastfeeding my daughter for the first three weeks. It was painful, and there was very little milk. During feeding time, she would cry and I would cry along with her," recalls Christina Anthony, 33.

In desperation, the secondary special education schoolteacher from Kuching, Sarawak, resorted to feeding her baby with formula milk, a solution she wasn't entirely contented with.

Most mothers can probably relate to Anthony's ordeal. But there are also those who claim to have breezed through breastfeeding and motherhood, while women like Anthony are met with disdain because they seemingly "lack" a certain something.

Anthony had to deal with "skeptics" - family members and friends who were doubtful of her ability in breastfeeding.

"They would say: 'You just don't have milk. Don't stress yourself.' Friends who had breastfed their children thought that I wasn't trying hard enough. I broke down in tears when one of them said that I was just making excuses," she reveals.

However, thanks to a local online breastfeeding support group, new mothers can find support and advice for their woes.

The Breastfeeding Advocates Network (TBAN) is an online community of mothers on Facebook who help those in need of (literally) "motherly advice" when it comes to newborns and breastfeeding.

What goes on is a real-time sharing of experiences; members can post SOS shout-outs on the group's wall and expect a reply within the hour. Comments are monitored around-the-clock by a group of voluntary administrative staff, to ensure the accuracy of the information shared.

It has been over a year since Anthony first stumbled upon the group - suffice to say, her 19-month old daughter, Amanda Grace David, is now a healthy breastfed child.

"I was on the verge of giving up when I discovered TBAN. I started connecting with the community and to my surprise, received many words of encouragement from the mothers. I picked up some techniques on how to solve my latching problem and increasing my milk supply, and within two months, I was breastfeeding my daughter 100 per cent," she shares.

Founded in 2009 by breastfeeding consultant and mother-of-four Gina Yong, TBAN believes that "breast is best" when it comes to raising healthy children.

The group is open to anyone and everyone who supports breastfeeding. As of August, the group has over 21,000 members, some of whom have since gone on to become certified breastfeeding peer counsellors.

"I bet you've heard this before: that out of five mothers, three would say they have no breast milk. Our society is programmed to think that feeding your baby with formula milk is the norm, and that breastfeeding is an option. But that's not true at all," says Ashley Ho, 34, a full-time mother-of-one who doubles as a TBAN administrative member and breastfeeding peer counsellor.

Though breastfeeding is widely encouraged and proven to provide greater benefit to a child's brain development, many mothers don't do it due to various reasons.

According to a report last year, only 23.7 per cent of babies born in the country are breastfed exclusively for the first six months.

In Ho's opinion, most women can successfully breastfeed with a little guidance.

"Some mothers give up breastfeeding because they find it painful. Yes, it can get uncomfortable at first but if there's excessive pain, it's quite likely that you are doing something wrong," she explains.

A common mistake in breastfeeding is when a baby latches onto the nipple, instead of the areola (the coloured circle around the nipple).

Another misconception: mothers usually don't produce enough milk during the first three or four days after birth. Colostrum is produced in the early days of breastfeeding - a yellowish liquid that is low in volume but thick with nutrients.

There is a demand-supply rhythm to breastfeeding, and a mother's supply of milk will gradually increase along with the feeding needs of a newborn.

The mother-of-one persevered even when she developed mastitis, a painful inflammation on one of her breasts, when she first began breastfeeding her daughter, Mahdiya Hasrul Aizan, a year ago.

Blocked milk ducts, due to an obstruction of milk flow, can lead to breast engorgement and eventually mastitis. Like Anthony, Marliza's daughter struggled with latching onto the breast.

"I was clueless about breastfeeding. I had no one around me to give me the proper advice, so I just did the best I could. I continued breastfeeding even though my breasts hurt every day," says Marliza.

She recuperated well, and breastfeeding became easier by the day.

The former wedding photographer has since attended a three-day training course to become a breastfeeding peer counsellor, and is currently an active TBAN member, helping ease new mothers along on their breastfeeding journey.

"It is important to understand that breastfeeding requires effort, and that overcoming difficulties is all part and parcel of the whole experience. While technique and knowledge is important, mothers should also get to know their own bodies.

"Nobody can produce the same amount of milk at the same time, and at the same capacity," says Ho, encouraging new mothers to seek help and support.