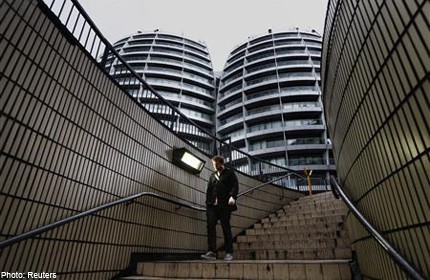 LONDON - East London's technology hub is established well beyond start-up status: Thousands of new web firms now work in the offices around Old Street and on any given day the area's coffee shops buzz with young hopefuls meeting advisers and investors.

Britain's government has christened the area "Tech City" and makes no secret of its hope that the entrepreneurial ventures being dreamed up there can spearhead an economic boost to lift the country out of a long recession.

But its plan faces a major hurdle: the area touted as London's answer to Silicon Valley has not produced a single big-name UK-listed company. Many firms are failing to secure second-round funding while the cream of the crop are being snapped up by US venture capitalists and top names like Yahoo, taking jobs and potential tax revenues with them.

Worried, the government has launched a string of policies to try to ensure that the best of British tech secures the funding and expertise it needs to grow inside the United Kingdom.

"We've lost a lot of our best and brightest businesses to the US," says Joanna Shields, who held management positions at Facebook, Google and Bebo and now runs the government's Tech City Investment Organisation to encourage inward investment.

As part of the same push, Finance Minister George Osborne launched the "Future Fifty" project to share contacts and advice with companies looking to expand internationally. He has also cut capital gains tax for young businesses.

Prime Minister David Cameron is disappointed that Britain has not yet created a Google or an Amazon.

"I want to try and make sure that the next wave, and there will be a next wave, some of those are born and bred right here in Britain," he said last month.

"In America, if you start a company and show some progress, you are probably going to get another round," said Cook. "In Europe, only one in five (companies) can raise any more money."

The reason? Too many young British tech firms lack the skills to sell themselves as the big global names of the future.

"We see a lot of good companies which have a profitable business model... but either they are in a smaller niche or do not have the ambition to be global," said Martin Mignot of European venture capital firm Index Ventures.

For Tom Blomfield it was his experience in the US that helped him to secure backing for GoCardless, a company that enables more than 10,000 small businesses to accept direct debits. He spent four months at San Francisco's prestigious Y Combinator, in effect a boot-camp for start-ups, and says it taught him that to succeed, a business must solve a problem.

"The thing that really validates your business is users paying for what you are selling, not some mentor telling you that your business plan looks great," he said.

But Wood's story is rare. The list of her promising British peers to have been bought out by established US companies makes depressing reading for Cameron's team. Internet radio station last.fm sold to CSB in 2007, while games firm Playfish was bought by Electronic Arts for about US$300 million in 2009. TweetDeck, a desktop for managing social media, was snapped up by Twitter in 2011 and Summly, an app founded by 17-year old Nick D'Aloisio, sold out to Yahoo for a rumoured US$30 million in March, only months after it launched.

US investment = US listing

Persuading firms to stay and grow at home needs more than policies offering advice and hand-holding. A dearth of British venture capital is a notable issue.

Technology investment is dominated by American venture capital firms, which are comfortable with the risks as well as the potential rewards of the sector, and thus reap returns to invest again. British investors are more cautious and because few have a track record of success, continue to steer clear.

It's a situation most ambitious British start-ups go along with because of the prestige associated with US involvement and mentoring. And while US investment holds sway, US listings dominate.

Right now payday lender Wonga and software firm Mimecast, both backed by venture capital firm Dawn Capital, are gearing up for stock listings in New York rather than in London. Social gaming company King.com, which has main offices in London and Stockholm, is also eying a US IPO, according to a FT report.

In an attempt to break the cycle and keep talent at home, the London Stock Exchange set up a High Growth Segment this year, copying New York's Nasdaq and letting entrepreneurs list 10 per cent of their firms rather than the 25 per cent normally required, so they can keep more control of their fast-growing businesses while they raise cash.

The scale of the challenge is significant. According to the London Stock Exchange, the 246 tech companies listed on Britain's stock markets total US$200 billion in capitalisation, compared with US$3.2 trillion in the US Meanwhile, investment in London-based tech groups is falling, due possibly to a loss of appetite for the kind of consumer internet companies the city tends to produce. Some 24 London-based companies pulled in 62 million pounds (S$117.8 million) in the first quarter of 2013, less than half the 151 million pounds raised by 29 companies in the final quarter of last year, research from market tracker Ascendant shows.

Nonetheless, says Index Ventures' Mignot, London's position is safe in the top tier of tech hubs, along with Silicon Valley and New York, and the city is fostering a healthy ecosystem of capital and talent.

"A lot of the ingredients are in place and the fact that the government is behind a move to make London more attractive for investors and entrepreneurs is likely to make it even better in the months and years to come."