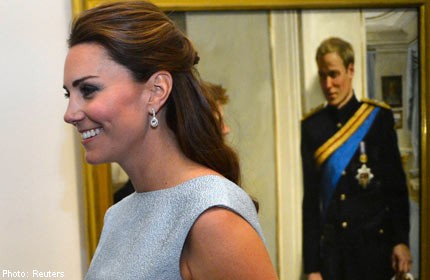 London - Britain's new royal baby will be third in line to the throne but a legal wrangle in the Commonwealth is holding up new law ensuring that a female heir cannot be overtaken by a younger brother.

Prince William and his wife Catherine's baby, due this month, will be born directly in line to become king or queen, after Queen Elizabeth II's eldest son Prince Charles, and then William, his eldest son.

Ending male primogeniture had been talked about for decades but William and Kate's wedding in April 2011 jolted governments into action to ensure that if the couple's first-born is a girl, its gender could not keep it from the throne.

The premiers of Britain, Australia, Canada, New Zealand and the 12 other countries where Queen Elizabeth reigns reached agreement in principle at the last Commonwealth summit in October 2011.

The law change must be unanimous and identical in each country to avoid ending up with different monarchs in different states. It can only come into effect when all the realms have ratified it.

But the process is not proving as straightforward as had been hoped, with challenges thrown up by Quebec in Canada and Queensland in Australia.

"It's a pretty complicated operation in which 16 countries in all have to change their law or their constitution," Robert Hazell, director of the Constitution Unit at University College London, told AFP.

"What the British government hopes is that the other countries may have changed their laws by the end of this year or at the latest over the next 12 months, but it's taken them a long time already," he said.

"If they had a girl and then a boy and if the new law had not been brought into effect, then the boy would be next in line to the throne, so it's not secured yet."

But if and when it is passed, then the legislation will be backdated to apply from the 2011 Commonwealth summit agreement onwards.

"It's not a race against time," said a spokesman for Britain's Cabinet Office ministry.

"All the realms agreed that they would do this."

In French-speaking Quebec the issue is a court challenge to the way that the Canadian parliament passed a law to agree to the succession changes, rather than a problem with the changes themselves.

Queensland meanwhile does not want to refer the powers to change the succession law to the 54-nation Commonwealth of mainly former British colonies.

By sheer coincidence, formal agreement to proceed with legislation was received on the same day last December that Kate's pregnancy was announced.

Sped through parliament in Britain, the Succession to the Crown Act 2013 gained royal assent on April 25.

"In determining the succession to the crown, the gender of a person born after 28 October 2011 does not give that person, or that person's descendants, precedence over any other person (whenever born)," it says.

It also removes the ban on a future monarch marrying a Roman Catholic, and limits the number of those in the line needing the king or queen's permission to marry to the first six.

Drawn up in an era of sectarian strife, the Act of Settlement 1701 governs succession to the throne.

It states that only Protestant descendants of Sophia of Hanover, the mother of king George I, can accede. Roman Catholics and anyone marrying a Catholic were specifically excluded.

The ban on Catholics inheriting the throne will remain in place as the monarch is also head of the Church of England.

The new baby will push back William's younger brother Prince Harry, 28, to fourth in line to the throne.

Harry, a helicopter pilot with the British army, will drop further down with any future children that William and Kate, or their offspring, may have.

In a new move, the baby will bear the title of prince or princess and enjoy the style of royal highness from birth, following letters patent issued by Queen Elizabeth on December 31 last year.

Just as there are no set duties for the heir to the throne, there are even fewer for those further back in the queue, with the royal baby facing a lengthy wait for the crown.

Patrick Jephson, former chief of staff to William's mother Diana, told AFP: "One of the big problems facing the future of the British royal family is this issue of a surplus of heirs.

"As long as most British people can remember they have had the same sovereign.

"A lot of young people, I would imagine, are keener there should be a king and queen of their own generation."