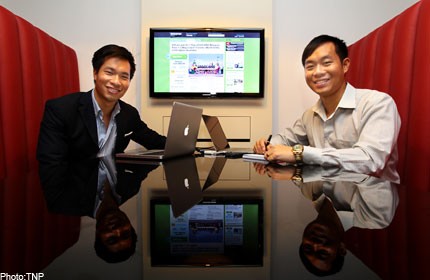 They hit the jackpot when their start-up, Beeconomic, was bought by the mother of all coupon deal sites, Groupon.

But surprisingly, things are still subdued for the Chong brothers and they remain humble

It's one of the greatest joys of success for these young entrepreneurs - waking up on their own beds.

For three months, brothers Karl and Christopher Chong shared a queen-sized bed in a hostel in Little India.

Recalls younger brother Christopher, 23, with a mock groan: "I'd wake up next to Karl. Every day."

Says elder brother Karl, 31 with a shrug: "I'd left my investment banking job in New York, while Chris took time off his law degree in Sydney to move to Singapore and, well, we needed to make our savings stretch."

Back in 2010, the brothers were starting out with their deal hunter website, Beeconomic.

All they had was $50,000, which represented their entire life savings, and an idea to make their site work.

The idea? Singapore was a perfect place for a deals website.

The population density, Internet penetration rate and history of online blog shopping made it ideal.

The elder brother had tried pitching the idea to Groupon in the US, but his e-mail had not drawn a positive response.

"I e-mailed every address of theirs I could find online saying that I would love to bring this idea to Asia and expand the Groupon brand there," he recounts.

When there was no reply, the brothers decided - with blessings from their Malaysian-born parents living in Sydney - that they would go ahead with the dream, hence the hostel stay.

With limited savings, they were reduced to eating chicken rice for every meal.

The younger Mr Chong regales this reporter with how the brothers would head to a nearby food court the first thing in the morning - to scrounge up some free Internet access.

Soon enough, "the stall owners knew our names", say the duo with a grin.

The younger brother recounts: "We had team meetings in our hostel bedroom. Karl would be calling our developers in New York, while I'd be out all day trying to close merchants.

"Karl was definitely better at this since he had experience pitching at his old investment bank. It was a sharp learning curve for me since I'd never pitched anything in my life. I had to overcome a lot of rejections before I closed my first merchant. "But it was the most rewarding feeling ever."

Within three months, they had hired a team of eight people and were able to move out of the hostel to a colleague's home.

And like a fairy tale, Groupon US came calling just months later.

Says Karl: "Six months later (since starting Beeconomic), they replied to my original e-mail and they said, 'Hey, we've noticed that you started this business and we'd love to start a strategic partnership with you. We are also going to talk to your competitors, so get ready to give a pitch.'"

Beeconomic proved to Groupon it was better than the other deal sites in the market.

Then came the deal.

According to media reports, it was purportedly worth $24 million.

The brothers are reticent about confirming the numbers, but say it was "a dream come true".

Beeconomic became Groupon's arm in Singapore, with the Chong brothers at its helm.

The brothers can't talk much business as they await the company's financial earnings in a few weeks' time.

Today, Groupon is a global company which boasts 41 million active subscribers worldwide, in 48 countries and with US$1.52 billion (S$1.88 billion) in gross billings in the fourth-quarter of last year.

Nor will they talk about the company's direction since its founder Andrew Mason was dismissed as Groupon chief executive officer in February.

But they'll talk about life after the big deal.

"The best moment? I could sleep on my own bed," says Christopher with much relief.

So where are the cars, the Versace couches or fancy mansions?

Says Christopher: "We still take the bus to work."

Adds Karl, the more serious of the two: "As far as splurging is concerned, we spend on experiences like holidays, trying something we've never tried before, learning about new places.

"Which is pretty much what we wanted from the deals, for consumers to try something new in their lives."

"But I think the best moment (of the deal) is that I can turnover on my bed and wake up and not see my brother next to me," he adds.

It's prudish behaviour when considering the millions they can play with. But Karl's and Christopher's decision to instead use their money for property investments and paying off existing mortgages is built from a mind-set instilled by their Malaysian parents CHECK, who worked in Singapore before migrating to Australia.

The type of hardworking migrants who made a name and business for themselves.

The brothers would spend their time during their school breaks helping out at their parents' print business, stapling pages And had they not been chosen, the brothers would have been on their own against a market fast filling up with competitors.

The older brother acknowledges that being part of the global group means they could tap into resources like Groupon meant so much to us with its global branding, technology and know-how.

"Otherwise, we couldn't have been able to compete with other competitors."

Today, the brothers, who also use Groupon deals, are going full on into improving Groupon's service standards, customer experience and quality checks on its merchants.

So naturally, the dedicated brothers are subconsciously thinking about work even during their down time.

Christopher already has his eye on an "awesome brunch space" in Tiong Bahru.

2. (the Groupon model) then kbcoupon1 which is a news story about these coupon sharing sites - 30 to 40 cms

3. kbcoupon2 - what are the biggest buy outs . give details of who and what etc

While the instant millionaires say their life is not so different now, one thing that Karl is glad of - the gamble paid off in another way.

With just $50,000 of their savings in their pockets, the brothers left Australia after bidding their Australian parents - migrants from Malaysia who used to work in Singapore - goodbye.

"I left my investment banking job in New York while Chris took time off his law degree in Sydney to move to Singapore and we needed to make our savings stretch," says older brother Karl, 31.

Coming to Singapore in 2010 CHECK was a big move for the brothers, with just their mum and dad's "blessing and approval", no financial help, according to Christopher, and armed only their savings, a prayer and chicken rice to rely on.

Says Karl: "Before we started Beeconomic, before I left finance, I sent an e-mail to Groupon. I e-mailed every address of theirs I could find online saying that I would love to bring this idea to Asia and expand the Groupon brand there but I didn't get a reply and that's when we decided to build our own business."

But the brothers decided to take the risks anyway, because they were desperate to start a company adopting the Groupon model, not in the US, not in Australia or Hong Kong but in Singapore, where its population density, Internet penetration and history of online blog shopping was the perfect test bed.

Adds Christopher of their three months of simple living before moving their "headquarters" to a colleague's house: "The stall owners knew our names. We had team meetings in our bedroom in the hostel, Karl would be calling our developers in New York and I'd be out all day trying to close merchants.

"Karl was definitely better at this since he had experience pitching at his old investment bank. It was a sharp learning curve for me since I'd never pitched anything in my life. I had to overcome a lot of rejections before I closed my first merchant. But it was the most rewarding feeling ever. We finally upgraded our offices from a foodcourt to one of our colleague's houses after three months of living at the hostel."

He had to contend with keeping a long-distance relationship alive with a girl living in New York while he took risks in Singapore.

"It was tough keeping the relationship going," says Karl, who now spends his weekend at home with his wife who works at the Singapore Art Museum.

The same girl who stuck it out over the distance moved to Singapore to be with Karl.

She sometimes helps with writing for Groupon's merchants here, he reveals fondly.

But they still dreamt of being under Groupon as the market began to get populated by other deal sharing sites.

Says Karl, as he reminisces about the uncertain beginnings, the emotional and romantic risks he took and of his business dreams coming true with brother Christopher: "I got the business and the girl."