●     Over 39 million hashtag Tweets globally, during the 30 days of the global contest

SINGAPORE - Media OutReach - Jun 20, 2016 - K-POP musician Bangtan Boys (BTS) have their fans all over the world. For 30 days of the global contest, from 13th May to 11th June, there were over 39 million Tweets across the world with the contest hashtags, averaging 1.3 million Tweets per day. If you look at the top 10 countries list, you can check their fans are in the Americas, Middle East and Asia. 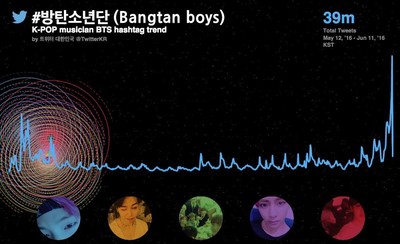 Brazil in Latin America, the new market for K-POP, was the final winner for the 'Korea Wave Idol' Bangtan Boys' fandom competition. While Brazil had the most Tweets, it was followed by Turkey, Russia, Thailand and Korea. The Philippines, Indonesia, Japan, the United States, and Malaysia were also in the top 10 countries. 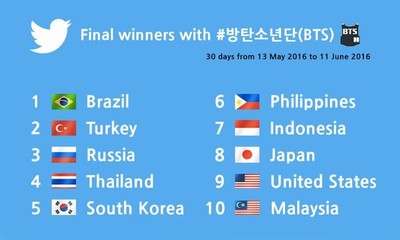 This contest began with Twitter providing a special emoji for Bangtan Boys' global fans, who communicate actively on the Twitter platform. The design of the emoji showed a bulletproof jacket because the Korean name of BTS means bulletproof boys. This emoji was the first of its kind for any K-POP musicians. To provide an opportunity for their global fans to connect in a fun way, Bangtan Boys held a campaign where the top five countries will each win a special thank-you video message. The winners would be the countries using #LoveBTS, #BTS or '#방탄소년단 most frequently, which are the official hashtags for the special emoji.

Bangtan Boys presented the fans in the top five countries with their special video messages during their busy schedule for the Asia Tour. On June 20th, Bangtan Boys Tweeted the thank--you messages with each countries' languages, saying "Thank you for Tweeting the #LoveBTS hashtag. We are very happy!" These Tweets were Retweeted quickly among global fans and received much attention once again . See below for the Brazil and Korea thank-you messages and visit their official Twitter account ( @BTS_twt ) to see the thank-you messages for Turkey, Russia and Thailand, too.

Meanwhile, the most shared Tweet of the campaign was the Bangtan Boys' video expressing their thanks to the fans worldwide which was viewed over 5.5 million times on Twitter.

Through this campaign, Bangtan Boys proved their broad global appeal all across the world, establishing their position as the latest global hit K-Pop group. In Brazil and UK, the live Tweets in various countries regarding Bangtan Boys' special emojis and the hashtag campaign were created into Twitter 'Moments' (https://twitter.com/i/moments/731042582910881792 ), which is a curation of the hottest content on Twitter.

Twitter is an iconic service and global platform for self-expression and live conversation. Twitter has always been the best place to see what's happening now. Whether it's breaking news, entertainment, sports, or everyday topics, only Twitter lets you connect with people anywhere in the world with live conversation. Anything that happens, you see it first on Twitter. By developing a fundamentally new way for people to consume, create, distribute and discover content, Twitter enables any voice to echo around the world instantly and unfiltered. Twitter is available in more than 40 languages around the world. The service can be accessed at Twitter.com, on a variety of mobile devices and via SMS. For more information, visit about.twitter.com or follow @TwitterKR .