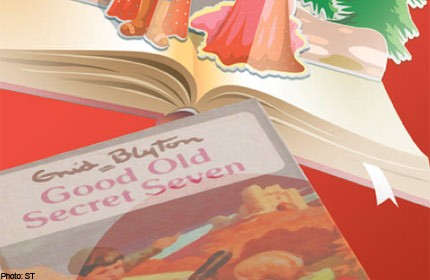 Her name was Mrs Mak, and she was a stern middle-aged woman with a complexion scarred by intense battles with pimples in her youth.

I can't say I liked her very much. Unlike some of my other teachers, she was neither warm nor motherly. It didn't help that she once flung my rain-soaked arithmetic exercise book out the window from our classroom on the third floor.

"Like hum choy," she said in disgust, using the Cantonese phrase for salted vegetables.

Anyway, one morning, my classmates and I trooped into the school hall to see what the travelling book-peddler had brought to sell. I was drawn to the pop-up books because they had very few words and many colourful 3-D pictures and was happily browsing through one when Mrs Mak came along and boxed my ears.

"Don't waste your money on this," she hissed before yanking the book from my hand.

She grabbed me by the arm and led me to a table strewn with works by Enid Blyton.

She picked one up and thrust it into my hands. It was The Secret Seven.

"Buy this instead," she commanded imperiously.

I was too traumatised to disobey her even though I actually had no intention of buying any books.

To begin with, they were a luxury my parents could not afford but more importantly, I could not read.

Yes, I was eight years old and a Primary 2 pupil but I could not read.

There were several reasons for this.

I come from a Cantonese-speaking home. My two elder brothers and my aunts and uncles were all Chinese-educated, so no one was in any position to teach me.

Since my folks were too poor to send me to kindergarten, I started Primary 1 without even knowing the alphabet.

That night, I went home and pleaded tearfully with my mother for a couple of dollars so that I could pay for my copy of The Secret Seven.

"My teacher said I have to buy it. If not, she will scold me," I told my mother, who worked as a washer woman to supplement the meagre income of my father, a driver and delivery man.

And that's how I ended up with my first book, one which I could not read.

Maybe the prospect of Mrs Mak grilling me about what happened to child detectives Peter, Janet, Jack, Barbara, George, Pam and Colin terrified me. Maybe I was too consumed by guilt over the fact that I had frittered my parents' hard-earned money on something I could not even understand.

Whatever it was, I forced myself to read. Not once, but several times. And don't ask me how, but I actually began to understand the words and the sentences I was reading.

Studies have shown that people learn to read in many different ways. Some begin by slowly mastering phonics, others start off as non-readers but become fluent readers in a matter of weeks, and yet others suddenly realise they can do it one day without knowing how they learnt to do so.

I guess I belong to the last category although I still find it puzzling, considering that I did not even speak English in the first place.

I had no exposure to the English language, not even from television because my family didn't own one until I was 14.

But it didn't matter because reading changed my life. By nine, I had devoured a major chunk of Blyton's oeuvre.

I read every single Blyton book I could find in my primary school library, from The Famous Five to Malory Towers and St Clare's and The Magic Faraway Tree.

Years later, I was to find out that Blyton - who died aged 71 in 1968 and who had sold 600 million books - was reviled in many quarters. Critics and educationists have labelled her books shallow and repetitive; biographers charged that she was manipulative and cynical, racist and xenophobic even.

I beg to differ. After all, I owe her a lot.

For a boy growing up in a poor, gangster-infested neighbourhood, the Blyton world of pixies and golliwogs, boarding schools and midnight feasts, as well as licorice and ginger beer was nothing short of magical.

She was the reason I developed a voracious appetite for reading. From the age of 12, I would take a bus every Saturday morning, first to the British Council - then located on a little hill not far from Merdeka Square in Kuala Lumpur - and later to the nearby National Library to stock up on my week's worth of reading.

My taste was nothing if not eclectic. I enjoyed Kenneth Grahame and Roald Dahl as much as a Mills & Boon novel. The latter was always readily available, thanks to my neighbour who was a romance novel junkie.

Mock me if you must but I can still remember some of my favourite Mills & Boon authors: Anne Mather, Anne Hampson and Violet Winspear.

Then there were the books from the defunct Liverpool Press, which the Indian book peddlers in downtown KL often kept in drawers.

I'm not sure if reading the smutty novels expanded my teenage mind but it definitely gave me a very expansive X-rated vocabulary. My reading habit made me a bit of an anomaly in the none too premium neighbourhood schools I attended.

My command of the English language often came as a surprise to many of my teachers. I remember being mocked by my Book-Keeping teacher in Secondary 2 when I used the word "complicated".

"Where did you learn such a big word?" he taunted.

In more ways than one, my love of the written word is responsible for my choice of a degree - literature - and profession - journalism. Sadly, I don't read as many books now as I used to. And when I do, I find that I can't concentrate on a book as much as I could when I was young. But every now and then, during breaks from a captivating book, I'd think of Mrs Mak and how she boxed my ears.

If only she knew how she changed my life.