HENGSHUI, China, Oct. 1, 2017 /PRNewswire/ -- The 2017 Hengshui Lake International Marathon and National Marathon Championships (No. 3 Station) came to a successful conclusion at Hengshui Lake, Hebei province, China on September 30, 2017. Hengshui Lake is also known as being part of what are generally considered the most beautiful wetlands in China's Beijing-Tianjin-Hebei region. Nearly 16,000 runners, many of whom came from abroad, participated in the competition. Kenyan runner Michael Njenga Kunyuga won the men's full marathon with a time of 2 hours, 12 minutes and 30 seconds, while runner Betty Wilson Lempus, also from Kenya, claimed the championship in the women's event, clocking in at 2 hours, 30 minutes and 46 seconds. 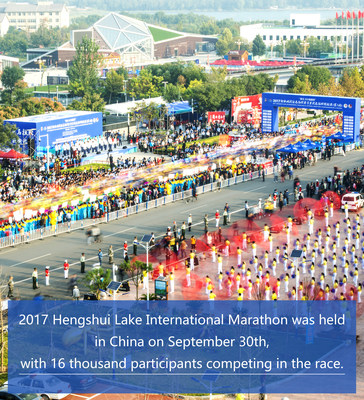 The competition was co-organized by the Chinese Athletic Association, the Hebei Provincial Bureau of Sports and the Hengshui Municipal Government. The inaugural event, in 2012, was accredited by the Chinese Athletic Association as a Silver Label race, while the second through fifth editions of the event earned the Gold Label designation. In early 2017, the event was named an IIAF Bronze Label road race by the International Association of Athletics Federations.

The 2017 competition is the sixth edition of the Hengshui Lake International Marathon. Runners from over 20 countries and regions, including Eritrea, Ethiopia, Kenya and Morocco, as well as competitors from more than 20 provinces and cities across China, participated in the event. At this year's event, participants could choose to run in one of three race categories: the full marathon (42.195 km), the men's and women's half marathon (21.0975 km) and the men's and women's mini race (5 km).

The Hengshui Lake International Marathon is the only such event in China that can genuinely be described as having a course that runs alongside a lake for the entire duration, as the starting and ending points as well as the vast majority of the course are all located along the edge of Hengshui Lake. The elaborately planned, designed and constructed tracks around the lake have received positive feedback for their wide and flat surfaces, as well as the gently sloping course - the altitude ranges from 21 meters to 26 meters above sea level - complemented by the beauty of the surrounding terrain, landscaped with trees and flowers in bloom. The negative oxygen ion content of Hengshui Lake is dozens of times higher than what one finds in the neighboring cities, allowing the lake and its immediate environs to serve as a natural oxygen bar. The tracks around the lake are considered excellent for getting and keeping in shape while the high quality of the air serves to relieve fatigue rapidly and efficiently, assuring runners of being able to achieve better competition results than they might elsewhere.

Hengshui, the city in Hebei province most recently upgraded to prefecture level, is in a strategic location within the Beijing-Tianjin-Hebei region and the Bohai Economic Rim. Within two-hour driving distance of the Beijing-Tianjin Economic Circle, Hengshui is recognized as a key hub by leading Chinese sociologist Fei Xiaotong. Hengshui Lake National Nature Reserve's wetlands and special protection zones for birds form part of the largest single freshwater lake in Northern China. It is generally recognized as the most beautiful lake in the area south of the capital, as well as the home of the most valuable wetlands in the Beijing-Tianjin-Hebei region. Hengshui is a leading destination for Chinese holidaymakers as well as for vacationers from neighboring countries.