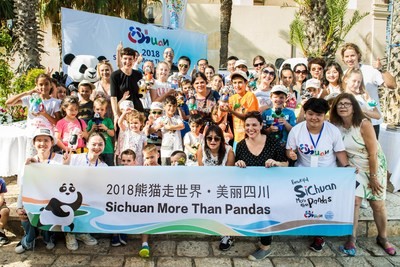 TEL AVIV, Israel, July 6, 2018 /PRNewswire/ -- Well-known as the "Land of Abundance" since antiquity, Sichuan has always been well-endowed with tourism resources that range from majestically idyllic and serenely picturesque natural sceneries to time-honored and age-refined cultural landscapes. The province is also the home of the giant panda, "Chinese national treasure," as 80% of the world's panda habitats are located in Sichuan. As the progress for creating an important tourist destination of the world picks up speed, Sichuan's attractiveness for travelers around the world has also increased steadily and surely. 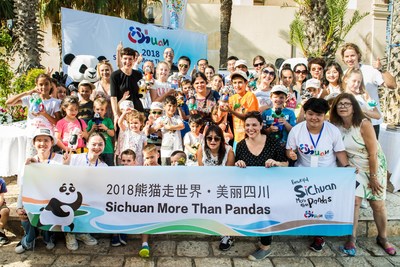 the 2018 “Beautiful Sichuan, More than Pandas” tourism promo campaign officially kicked off in the city of Tel Aviv

On July 5 local time, the 2018 "Beautiful Sichuan, More than Pandas" tourism promo campaign officially kicked off in the city of Tel Aviv, the second largest city of Israel. In the four-day span of the journey, the Sichuan tourism marketing and sales delegation engaged in extensive explorations and exchanges with numerous renowned Israeli tourism organizations in order to actively expand the inbound tourism market.

Sichuan Garners Attention as "Important Tourist Destination of the World"

On the day, inside the restaurant Abrage at the Old Town of Jaffa in Tel Aviv, panda fans of the city were captivated as the irresistibly adorable panda costumed mascot danced to joyful tunes. Fans and bystanders alike vie for a picture with the panda mascot while others participated in the giant panda painting activity. The energy on-site was electrifying and the atmosphere invigorating.

"Tourism is a business of beauty, fortune and happiness". From the perspective of Hu Bin, the Secretary of the Party Organization and Deputy Director of the Sichuan Provincial Tourism Development Committee, tourism is life itself, and is a form of aesthetic experience and cultural integration across regions. In this age of big data, industry 4.0 and mass tourism, Sichuan is emphatically promoting tourism across its entire territory and accelerating the construction of an important tourist destination of the world.

As the finale of the event, Hu Bin was joined by delegates with the Israel Government Tourist Office and leaders from the Chinese Embassy in Israel for some hands-on painting of panda figurines, with the outcomes featuring characteristics of both sides and propelling the on-site ambiance to new height. Many popular Israeli media collectively reported on this event.

Upside Expected for Opening of Non-stop Flight in August

During March 19-22, 2018, the Prime Minister of the State of Israel Benjamin Netanyahu made an official visit to China. The two nations issued the Joint Declaration by the People's Republic of China and the State of Israel on Establishing an Innovative and Comprehensive Partnership, including the stipulation that the "two nations will strive to expand the scale of aviation transport, develop new commercial flight routes and realize significant growth in the number of mutual visits for tourism and business purposes".

At present, Sichuan is facilitating the international tourism cooperation with an emphasis on the Belt and Road Initiative. Sitting at the juncture of the European, Asian and African continents, Israel's location is a vital node in building the Belt and Road in the Middle East. Persons familiar with the matter expressed that dividends of the Belt and Road Initiative continue to emerge, and other than more convenient visa issuance and rapid surge in sightseers, cultural exchanges between the two sides will also get a boost in return.

Statistical data from the Consulate-general of Israel in Chengdu indicates that the number of visa applications received in April 2018 soared by 2.5 folds comparing to the same period in the previous year. Behind this meteoric rise is the increasingly deepening interaction between the southwestern part of China and Israel.

"Israel is a land of history and heritage. The people of Israel and Sichuan share many things in common, and Sichuan symbols like the giant panda and local cuisine have a great appeal to Israeli globetrotters," says Amir Lati, the Consul-general of Israel in Chengdu, who believes that the non-stop service between Chengdu and Tel Aviv will vastly facilitate exchanges in tourism, culture, commerce, science, technology and other fields between Sichuan Province and Israel.