YANGZHOU, China, April 8, 2021 /PRNewswire/ -- At the intersection of the Yangtze River and the Grand Canal, the 2021 International Horticultural Exposition opens on the morning of April 8. This is the first time that the grand event of the global horticulture industry has settled in the Yangtze River Delta. The concept of China's green development has been spread to the world once again. 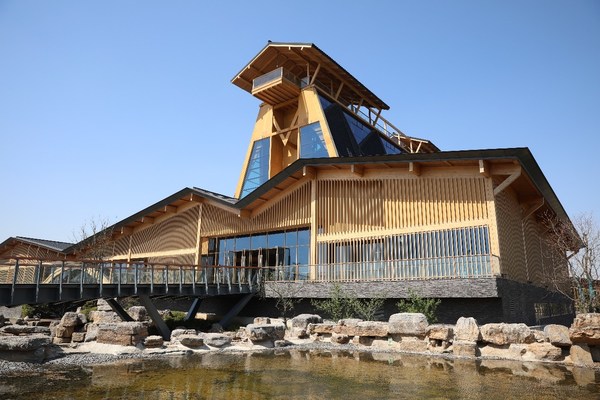 According to the Organizing Committee of 2021 International Horticultural Exposition, the 6-month expo (from April 8 to October 8) will be located in the largest hilly ecological park in East China, the provincial tourist resort Zaolin Bay Tourism Resort, with a total area of 230 hectares. The expo has a total of 64 exhibition parks. In addition to the Jiangsu exhibition area, which has 13 districted city exhibition parks, there are a total of 26 cities and enterprises participating in the domestic exhibition area, and 25 cities and organizations from abroad.

The expo fully shows the unique advantages of the world's gardening book Yuanye and implements the idea of "Even though made by humans, like from heaven". It is uniquely built the International Pavilion using "Finless Porpoise" as the blueprint, the largest artificial waterfall in Jiangsu "Fantasy Waterfall" plastic rockery, "Great Forest and Valleys" China Pavilion with large-scale wood structure, and "Qionghua Xianji" Yuanye theme park.

Adhering to the concept of "Green Dream, Green Construction, Green Life", the expo, guiding the preliminary design and resource allocation, vigorously promoted the deep integration of the exhibition and post-operations, and actively explored the sustainable use of the expo.

Since the beginning in Rotterdam, the Netherlands in 1960, the expo has been held in Europe and Asia for nearly 40 sessions, of which China has hosted 9 times. It is of great significance and far-reaching influence.